A Promise Takes Flight with $30 Million for Students and Families 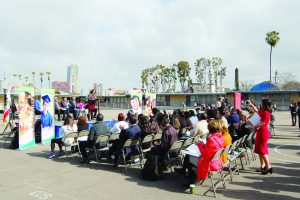 Fulfillment of a promise to children and families of the San Ysidro, Logan Heights, and Barrio Logan communities was in full force this week as community and government leaders gathered in Barrio Logan to celebrate the creation of the San Diego Promise Neighborhood Initiative.

Over the next five years, $30 million in funding from the U.S. Department of Education will be combined with another $39 million from three school districts, local government agencies, non-profits, health services and businesses who are committed to provide “cradle to career” holistic services in education, mental health, and family assistance to support children from birth to the completion of college with the goal of improving outcomes not just for the students, but also to support their parents.

San Diego Mayor Kevin Faulconer, who was among more than 40 civic, school, nonprofit, and business leaders who attended the celebration, called the funding, “a game changer.”

“This is a pipeline of services to support our children and our families, and it helps level the playing field so that no matter where you are in San Diego, you will have access to opportunity,” the Mayor also said.

San Diego County is the only county outside the Mississippi Delta to have two programs—one in Chula Vista and the other covers the communities of San Ysidro, Barrio Logan, and Logan Heights, according to South Bay Community Services President and CEO Kathryn Lembo, whose organization coordinated the San Diego Promise Neighborhood collaboration.

“To just start on a journey that its main focus is to strengthen the vitality in the community and the strengths in the community, so that all children have equal opportunity, and equal access, and also, to lift families up,” Lembo also said.

About 13,000 family households comprise the area covered by the recent funding which will also provide wraparound services such as parent education, nutrition, a resident leadership academy, food banks, and transitional and affordable housing, among other services.

Rachel Ortiz, the founder and director of Barrio Station, is among the community leaders who are a part of the collaboration.

“We are glad Barrio Logan was finally recognized by U.S. census tracts. We need a lot of services. We have kids in need of assistance to keep them in school and avoid addictions,” Ortiz said.

Phil Blair, CEO of Manpower, is another partner with the Promise Initiative which will be helping students find internships and jobs, also attended the event.