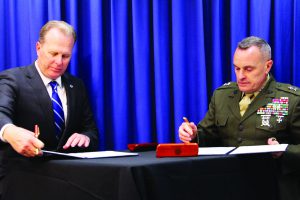 Continuing the strong tradition of partnership between the City of San Diego and the U.S. military, Mayor Kevin L. Faulconer and Marine Corps Maj. Gen. Vincent A. Coglianese signed a new Memorandum of Understanding (MOU) between their organizations to work together on “Smart City” technologies such as unmanned aircraft systems (UAS), smart street lights, renewable energy and the City’s Get It Done application.

“We’re building on the long tradition of collaboration between the U.S. military and the City of San Diego and taking that partnership to the next level for the betterment of the San Diego region,” Faulconer said. “We will share our experiences, share our discoveries, and share how advanced technology can benefit the people we serve.”

The MOU calls for the City of San Diego and Marine Corps Installations Command (MCICOM) to meet regularly to discuss “Smart City” issues impacting both organizations, exchange technical ideas, review the status of ongoing projects and identify new areas of collaboration. This partnership will begin by utilizing working groups to review issues and develop action plans related to the following areas: protection/security, mobility and public works.

“San Diego and the Marine Corps have a long history working together and this agreement is a testament to our partnership,” Maj. Gen. Coglianese said. “Marine Corps Air Station Miramar and the City of San Diego have significant ties with infrastructure and utilities, and both see opportunities to partner in developing innovative solutions on resilience, improved services, and transportation.”

Last year, the City of San Diego was selected to participate in a pilot program by the U.S. Department of Transportation to advance the testing of UAS, grow the innovation economy and create jobs. As part of the MOU, the City will request the inclusion of the Marine Corps as one of the 20-plus partners in the San Diego region’s consortium for the pilot program.

MCICOM has established a representative in San Diego focused on innovation on West Coast installations – including two San Diego-based installations at Marine Corps Air Station Miramar and Marine Corps Recruit Depot San Diego. The Installation neXt concept brings together the power of ideas and community partners to imagine and reimagine the application of emerging state-of-the-art technology, processes and organizational adaptations to the future of Marine Corps bases.

Named one of the World’s Smart Cities by National Geographic in 2015, the City of San Diego has implemented several advanced technologies to improve city operations, customer service and public safety since Mayor Faulconer took office. Examples include smart streetlights, and the Get It Done application.