Alvarez Vs. Golovkin Rematch a ‘Privilege’ 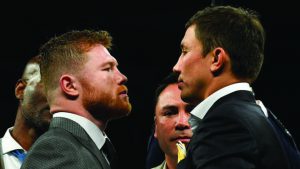 “We are privileged to get a rematch; I’m very excited,” he said.

Vaden, who trained under Golovkin’s cornerman Abel Sanchez, mentioned he does feel a bit of bias due to the great relationship between him and his former strategist.

“I don’t know what ‘Triple G’ will do different but, having worked with Abe, I know he will have him ready,” Vaden said. “Truthfully, we have to think about (Golovkin’s) pursuit of ‘Canelo’ and whether ‘Triple G’ can get ‘Canelo’ to stop moving near the ropes.”

“Abe and ‘Triple G’ want him to stay put and you hear them say to media they hope (Alvarez) gives them a fight; it’s all psychological because they want him to sit down and brawl,” Vaden added.

Despite his familiarity and relationship with the head of the Golovkin camp, Vaden considers himself a fan of the Mexican redhead.

“I love the ‘Canelo’ attitude. Even after losing to (Floyd Mayweather), I just loved his attitude because he knew he had nothing to be ashamed of,” the former champion stated. “I like how he can box and punch; he has fluidity, power, and can also counterpunch. I like that he carries his country on his back, I like that appeal.”

“But I also don’t like the controversial stuff and I don’t like it when people take stuff,” Vaden added in relation to Alvarez’s possible use of Clenbuterol, a steroid used to enhance direct oxygen intake in the lungs. “But I like everything he does.”

Vaden did not hold back from singing his praises about Golovkin as well.

“I like his power, his technique, how he covers the ground, and the fact that he is consistent. I respect his amaeur background. I love his trainer and am grateful to his trainer, and I think he is a really good boxer,” he remarked.

When asked for a prediction on who will walk away with the middleweight championship belts at stake, Vaden took a measured stance many will agree with.

“I can’t pick a winner, but all I know is that these two individuals are legitimately talented,” he closed with a laugh.

Alvarez and Golovkin’s second encounter will be broadcasted live from Las Vegas’ T Mobile Arena via HBO Pay-Per-View, with the undercard staring at 5 p.m.