Artists Speak Up for Immigrant Rights With New Exhibition 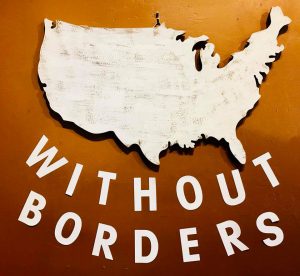 It was standing room only at Border X Brewing in Barrio Logan last Saturday during the opening day celebration of Without Borders Sin Fronteras, a multimedia art exhibit about immigration.

Local artists, musicians, poets, and photographers of diverse cultural backgrounds from both Tijuana and San Diego came together to show solidarity for the rights of immigrants with the exhibition, on display through the month of August.

A painting by Barajas titled “Los Indispensables” – the indispensables ones – shows six USA Forever stamps showing different jobs immigrants take in the U.S., such as as caregivers, working in the fields, in the restaurant industry and other jobs.

“Migrant workers are indispensable,” Barajas said of his piece.

In a piece on display by Ochoa a turtle swims through the flags of Mexico and the United States with a child, representing the people of the future, on its back. Ochoa explained that Turtle Island was the original name of this hemisphere, which includes coastal areas of both countries.

This painting also includes a footprint texture to show how prehistoric people denoted migration by carving a foot on stone to show that someone has been there.

A number of musicians were also featured at the event. Among these was Andres Useche, who has toured the country for 10 years performing songs he wrote in support of immigrant rights.

“I’m always trying to create media to inspire people to come out and join us and hopefully stand up for what I believe are the foundations of this country, a country of immigrants, that was built and continues to be enriched by the work of so many immigrants,” Useche said.

The exhibition was Aranda’s idea and in some ways was years in the making. She is originally from Aguascalientes, Mexico and entered the United States without the proper documentation in the late 1980s due to a number of economic hardships which forced her family to leave Mexico.

“I remember the desert, the tunnels, rats, and highways,” Aranda said.

After crossing successfully, Aranda’s family got the opportunity to get the last amnesty offered in the U.S, but the memories of her family’s personal struggles remain.

“With the current situation I thought I should do something about it, not just watch the news, be at home upset, but take positive action,” Aranda said. She was also motivated by an exhibition she saw in Cuba about immigration.

Aranda also said Parra, has also been a mentor and guide during the planning of the exhibition. After learning how Border Angels helps immigrants in many ways, they paired up with Enrique Morones.

The exhibition at Border X Brewing is also a fundraiser for Border Angels, whose programing includes trekking into California’s desert to drop water off to prevent unnecessary deaths in places where migrants may pass.

Enrique Morones said a lot of people want to get involved but can’t make the journey to help out in the desert, so the exhibit offers a way to get involved either through donating art, buying a T-shirt or volunteering for other Border Angels programs.

“Art is a great way to express what is taking place in the world. The struggles immigrants are facing are not just here. It’s a worldwide phenomenon,” Morones added.

Nicole Ramos is the Refugee Program Director of the non-profit Al Otro Lado, which serves deportees, migrants, and refugees in Tijuana. She was one of the keynote speakers at the event and hoped the exhibition will shine a brighter light on immigration issues so San Diegans gain a better understanding of what is happening to refugees trying to access the U.S. legal system from the other side of the border.

“For me it was important to educate people who I felt would be interested in this issue, and who also might want to help in this issue in terms of coming to Tijuana, accompanying refugees to the border, to make that long walk to the port of entry, so they could feel they had some sort of protection,” Ramos said.

Border X Brewing CEO David Favela pointed out that art is a regular part of the fabric of the brewery.

“We like to focus on all the positive aspects of the border region—the way the culture and traditions seamlessly cross from one side to the other. We believe that’s a good thing. We celebrate that, ” Favela added.