Atkins Announces Expansion of Treatment for Breast and Cervical Cancers 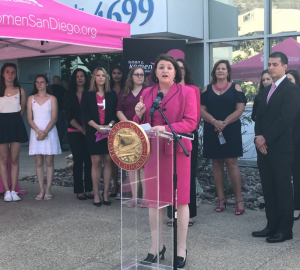 In 2016, Governor Brown signed AB 1795, authored by then-Assembly Speaker Emeritus Atkins. The bill required the State, through the Every Woman Counts program, to provide breast cancer screenings to symptomatic women who are younger than 40 years old. It also required the state, through the Breast and Cervical Cancer Treatment Program (BCCTP), to cover treatment for individuals who experience a recurrence of the same type of cancer in the same part of their body.

SB 945 builds on AB 1795 by removing these caps on treatment under the BCCTP. Previously, patients in the program lost eligibility after 18 months for breast cancer and after 24 months for cervical cancer.

“Today we are witnessing the survival of countless lives,” said Gross. “Women and men who will no longer ask, ‘Why can’t I continue my treatment.’ Thanks to strong advocacy efforts from our supporters and community leaders like Senator Atkins, we are one step closer to our bold goal: to reduce the number of breast cancer deaths in the U.S. by 50 percent by 2026. We will continue to elevate the lives of those affected by breast cancer through our local funding of breast cancer resources, advocacy and investments in global research.”

Susan G. Komen is the global leader of the breast cancer movement, having invested more than $1 billion in breast cancer research since its inception in 1982. Komen’s promise is to save lives and end breast cancer forever by empowering people, ensuring quality care for all and energizing science to find the cure.

“Komen plays a great part in orchestrating major changes to legislation that (is) meant to elevate the lives of those affected by breast cancer. It starts from uncovering the need, rallying support from key leadership in our community and then advocating for equal and quality access to healthcare,” said Lizzie Wittig, Susan G. Komen San Diego’s director of Mission Initiatives and Public Policy.