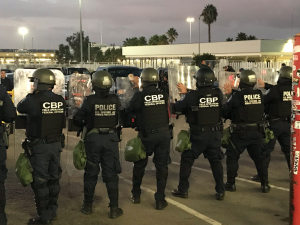 U.S. Customs and Border Protection (CBP) personnel performed three different scheduled operational readiness exercises at the San Ysidro Port of Entry, at the Otay Mesa Port of Entry, and at the Tecate Port of Entry in the last two weeks, this as a responsive measure to the illegal crossings of members of the migrant caravan in Baja California.

In all exercises performed at the San Diego border, CBP personnel wore riot gear as they deployed through the ports of entry and formed a line to prevent any illegal crossings. The CBP officers part of the training, threw smoke cans in front of them and even some high-noise devices to perform their training.

All northbound traffic was stopped during the training exercises at the three Ports of Entry.

The traveling public was advised of the training exercises a day before each training session so they could plan ahead because of processing delays. The exercises were each planned to last approximately 10 minutes, but they all lasted longer, specifically the exercise at the San Ysidro Port of Entry on Thursday, Nov. 22 lasted approximately one hour and caused long delays on the border crossing times of all San Diego ports of entry.

On Saturday, Dec. 1, CBP personnel performed the second training exercise at the Otay Mesa Port of Entry at 6 a.m. and lasted about 30 minutes. Similar to the one at the San Ysidro Port of Entry, this training included high visibility operations to the traveling public. This exercise came less than a week after a contentious showdown near the San Ysidro border crossing, on Sunday, Nov. 25, when Border Patrol agents fired tear gas canisters to turn back members of the migrant caravan who were trying to illegally cross into the United States.

Mexican federal, state and local authorities have since then, moved the location of a temporary shelter in Tijuana for members of the Migrant Caravan that was located near the San Ysidro Port of Entry and only meters away from the existing border wall that divides the U.S. from Mexico, to more than 14 miles away at El Barretal, a former dance hall.

The training at the Tecate Port of Entry was performed before 10 a.m. on Tuesday, Dec. 4, and was the shortest of all the three trainings.

“CBP is continually assessing the capabilities of our facilities and has been making — and will continue to make — necessary preparations. Preparations include participating in operational readiness exercises and the mobilization of resources, as needed, to ensure the facilitation of lawful trade and travel,” said the federal agency in the announcement ahead of each training at the San Diego border. “CBP’s highest priority is the safety and security of the American people, the traveling public, CBP personnel and the communities in which we serve.”