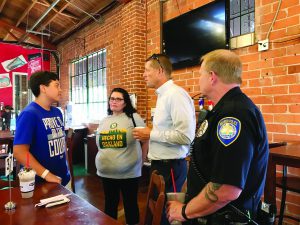 It’s not often that you’re presented with the opportunity to have coffee with officers from the Port of San Diego Harbor Police and candidly discuss pressing issues in the community as well as the role of the department.

Walking into the red brick building, we were greeted by a smiling Sergeant Victor Banuelos who is responsible for organizing Coffee with a Cop and other community outreach events as the department’s community policing sergeant.

He offered us a cup of hot coffee and pastries before we began to talk about the department’s efforts to interact with the community, technology used to help solve crimes, and their latest efforts to help vaccinate individuals around the port against hepatitis A.

Officers can typically be found policing the areas around Seaport Village but they can also be found in the water as they police the bay. However, on this particular morning, about 10 officers and Chief Mark Stainbrook were taking a break from policing and engaging in conversation with the community members that walked into the coffeehouse.

About six months ago, the department hosted its first “Coffee with a Cop” event in front of the Port Pavilion on Broadway Pier where passerbyers stopped for coffee and bagels as well as to ask about the role of the Harbor Police.

Because that event had a great turnout, they decided to host another one in Barrio Logan. And although the community is not in their jurisdiction, Cesar Chavez Park and the Tenth Avenue Marine Terminal, which sit just next to the community, are.

Banuelos added that although they do not police the area, a lot of community members work and play in the areas that the Harbor Police does police so the event provided a good opportunity for residents to ask questions.

“Coffee with a Cop allows us the unique opportunity to engage our community in a casual setting,” Banuelos said to La Prensa San Diego. “We believe this helps strengthen our relationships.”

Chief Stainbrook joined us in our conversation about the importance of engaging with community and he shared stories of his career in law enforcement as well as how technology has helped the department solve recent crimes.

The Harbor Police have also provided hepatitis A vaccinations to people around their jurisdiction to help increase the number of people who have been vaccinated.

The Coffee with a Cop event was held from 7 a.m. to 9 a.m. and according to Banuelos, they hope to host similar events in the future.