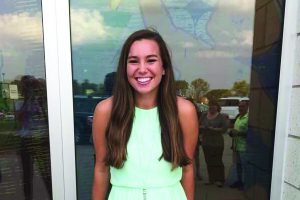 A missing Iowa college student’s body was found in a corn field after a suspect led police to the exact location of the remains.

Twenty-year old Mollie Tibbets had been missing for over a month after she disappeared while jogging. Tibbets, a college student at the University of Iowa, had last been seen when she was dropped off by her brother to dog-sit at a friend’s house. Police and volunteers conducted multiple searches throughout the community but had not found any clues as to her whereabouts.

This week, police reviewed a local resident’s security system video footage that had captured video of Tibbets running by while a car followed her. Police tracked the car which led them to Cristhian Rivera, 24, who has worked at a local dairy farm for over four years.

Rivera was arrested and questioned about Tibbetts. He admitted he saw Tibbetts jogging and followed her in his car, then confronted her on foot. Rivera told police Tibbetts threatened to call police on her cell phone and tried to run away from him before he abducted her. He later led police to a corn field where Tibbet’s body was discovered under cornstalks.

The murder has drawn the attention of President Donald Trump because Rivera had reportedly used a driver’s license and Social Security card of another person for pass the employment review process. Court documents allege Rivera is an undocumented immigrant from Mexico that has been in the United States since he was 17 years old. Immigration and Customs Enforcement (ICE) has now issued a detainer warrant for Rivera, the first step in the deportation process.

On Tuesday, after news of Rivera’s arrest became public, President Trump used the story to politicize the debate about immigration, attacking Democrats for not doing more to fight illegal immigration, and again making a call to build a wall at the Mexican border.

“You heard about today, with the illegal alien coming in from, very sadly, from Mexico,” Trump said during a rally in West Virginia on Tuesday night.

“The laws are so bad,” Trump added. “The immigration laws are a such a disgrace…We need the wall.”
Trump, along with congressional Republicans, looked to change the political debate this week away from the breaking news on the same day that Trump’s former campaign chairman, Paul Manafort, was convicted on eight felony counts, and Trump’s former lawyer, Michael Cohen pled guilty to five felony counts, including illegally concealing payments to two women that have alleged extramarital affairs with Trump. Cohen admitted in court that he made the illegal contributions at the direction of Trump.

The horrific death of Tibbetts seemingly by an undocumented immigrants allowed Republicans to seize on the immigration debate as a renewed front in the upcoming midterm elections, although studies contradict the premise that immigrants commit crimes at a higher rates than native-born Americans.

Rivera’s lawyer complained during the arraignment that Trump’s comments about Rivera’s immigration status on national television could taint the public and deny Rivera a fair trial.

“I don’t understand how you can say somebody’s illegal until you have your day in court,” attorney Allan Richards said. “I think he’s just using it as a political thing that, in his mind, as sad and sorry as he is, that this wall thing is what got him elected and he’s going to insist on it. But the wall doesn’t stop the flow of people coming,” Richards added.

Rivera is being held on a $5 million bond and could face life in prison if convicted of first-degree murder. Iowa does not have the death penalty.