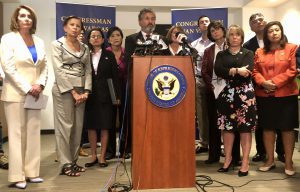 A delegation made up of 14 Democratic members of Congress, including House Minority Leader Nancy Pelosi, came to the border this week to see firsthand the effects of the policies that are separating thousands of families who have come to the U.S. seeking a better life.

During their short visit, the group toured the Southwest Key migrant shelter for children in El Cajon, which houses dozens of children – most of them from Central America – ages six to 17. The delegation then visited a detention center to see the conditions those who have sought political asylum are living in.

During a press conference in Otay Mesa, Pelosi stated that the children and teens at the shelter were “happy the moment they saw people were with them and they had not been forgotten.” She also defended immigrants who seek protection in the United States.

“The reality is that they had no other choice,” said Pelosi, “it was a matter of life or death,” in response to legislators who have called parents who put their children in this situation ‘irresponsible,’

“What we saw was parents in one detention center, and their children at another detention center,” lamented Las Vegas Congressman Ruben Kihuen. “For them to talk to each other there is a lengthy process, so it’s important to clarify that this is not about attacking the President or Republicans, it’s about trying to keep our families together.”

San Diego’s Juan Vargas noted that while the children seemed happy to see they had support, the people they really wanted to see was their parents.

The reason behind the congressional visit was to demand that President Trump revert the policy that led to the families being separated, which he did after two days of constant criticism throughout the country and abroad.

The President issued an Executive Order to keep families going through this process together and put an end to the “side effect” of his zero-tolerance policy, under which any who crosses the border illegally will face prosecution.

The American Civil Liberties Union, which has already filed a lawsuit aimed at putting an end to family separations, said that this will not be over until “every child has been reunited with his/her mother or father.”

“This executive order would replace one crisis for another. Children don’t belong in jail at all, even with their parents, under any set of circumstances. If the president thinks placing families in jail indefinitely is what people have been asking for, he is grossly mistaken,” stated ACLU Executive Director Anthony D. Romero.

For the Congress men and women who visited San Diego, President Trump’s insistence on these kinds of policies is his need to use the issue as “currency” to pass a law that includes funding for his promised border wall.

“It is a business that is making it very difficult for all of us,” said Congressman Lou Correa from Santa Ana, California.