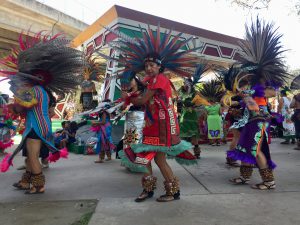 A candle was lit early morning last Sunday as dozens of danzantes sang, and the sounds of music echoed loudly through Chicano Park, setting off the start of Danza Mexi’cayotl’s 38th anniversary, a celebration of the traditions and dance of indigenous dancers.

Before they began to dance in what is considered an annual ceremony, an alabanza was made to request permission from the “antepasados,” or ancestors, to begin the day. Each dancer also honored the four directions of north, south, east, and west because different elements represent characteristics they believe in honoring, such as who we are, the duality of men and women, night and day, mountains, oceans and water.

Anaya also said the incense, also known as “copal” in Spanish, represents a white eagle, the white smoke carries their prayers up to their ancestors.

Sofia Metzteli, which means Moon in Nahuatl, Aguilar was born into danza, which Danza Mexi’cayotl notes is from the folk/indigenous dance tradition of Central Mexico based on the cultural legacy of the Chichimec/Otomi tradition warrior tribes that lived north of the “Aztec” empire. Aguilar has been dancing since she was in her mother’s womb 34 years ago. Her parents Mario and B. Aguilar manage the group.

Aguilar, an entertainment attorney in Hollywood, explained danza taught her a lot about having pride in her ancestry, her culture and who she is.
“Oftentimes in circumstances I am one of a kind in a room. It’s a field where people of color are not always present, so having the confidence to be proud of who I am and where I come from and my traditions, danza really taught me to be proud in all circumstances, carry my head high,” Aguilar said.

Each dance is a series of steps that are almost like different words of a prayer, Aguilar pointed out.

“We have dances for the Mother Earth, which is a duality for us as indigenous and as Catholics, the Virgin Maria. We have a warrior dance, that’s also San Miguel. We have a lot of duality. There’s a native god that matches a Catholic saint, so each one is a prayer.”

The way steps are marked is also important, Aguilar said. In the beginning of each dance, Mexi’cayotl takes steps in the shape of a cross as a way of following Catholic religious traditions and symbolizing the beginning of a prayer.

The night before the celebration, an all-night vigil was held along with a rehearsal practice with about 25 groups who traveled from the U.S. and Mexico. In total about 300 dancers were expected by the end of the day. The annual gathering is a part of the traditions followed by the groups gathered together at the park. Each one hosts their own ceremony, offering a chance for all to meet together and to learn from each other.

“It’s part of what we call work. You have to work this tradition and go to other ceremonies. It’s how you build conformidad with each other, family with each other,” Anaya points out.

Among the first dances was the Sacred Heart dance. “We all have the same heart,” Anaya said as he explained the purpose of the dance.
“Everything around us has a sacred heart from rocks to mountains to people to animals. We value that heart and we respect that heart. Without it nothing would be around.

“When you talk about diversity, we believe we are all the same,” Anaya added.

“We all beat the same heartbeat,” he said.

Aguilar added that her parents have taught her danza is a sacred space not just for the traditions, but also for what it represents for the Latino community.

“Especially in these political times, this climate, creating that space is so important. We need to show we are still here and we’re going to be here. We are not going to move anywhere,” Aguilar said.

She added danza is very powerful, especially when the group participates in protests.

“People always come up to us and say thank you for being here because you brought ánimo and the ancestors with you to help us fight for our rights.”

It’s more important than ever now to have danza creating that space, Aguilar said.