Dina Yorba: A Passion for Serving the Public 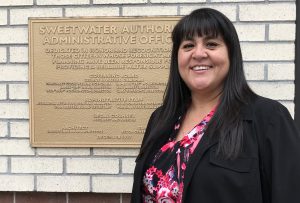 Throughout a career of almost 30 years with the Sweetwater Authority, Dina Yorba has worked her way up the agency, something, which she attributes to the mentors who encouraged her to do so along the way.

Similarly to the individuals who mentored her and encouraged her to seek growth within the agency, Yorba hopes to impart her passion for the agency and serving the public onto others.

As the director of administrative services, she oversees different departments in the Sweetwater Authority, a publicly-owned water agency.

Yorba began her career with the Sweetwater Authority in the field reading water meters then moved up the different levels of customer service representative until she became a supervisor. It was then that the general manager at the time asked her about her aspirations and encouraged her to consider getting a bachelor’s degree.

Through the Sweetwater Authority tuition reimbursement program, Yorba had the opportunity to earn a business management degree from the University of Phoenix.

She then promoted into the customer service manager position and was encouraged again by a different manager to consider advancing in the agency.

Yorba said that the individuals who encouraged her to seek different positions mentored her in a sense that they saw potential in her that she might not have seen in herself at the time.

“I think (having mentors) makes the biggest difference, I think in life you have different types of mentors,” Yorba said.

She said in her family her dad was a mentor for her and in her career, it was those managers that gave her advice and encouraged her to promote.

“I don’t know that I’d be where I am today if it wasn’t for those managers that planted those seeds,” she said.
Originally from Los Angeles, Yorba grew up in a small rural community in Tijuana with her siblings and parents. Her father was a farmer who had humble beginnings and her mother did not speak Spanish at the time, so English was the language spoken at home.

Yorba’s family was upper middle class but she recalls her father would have her and her siblings work in the fields during the summer to instil a balanced life in them.

“I think growing up where I did definitely gave me some good values,” Yorba said.

After attending elementary and middle school in her hometown, she moved to Los Angeles to attend high school.
Yorba recalls that attending school in Los Angeles was the most difficult thing because although she could communicate properly in English, she had problems with the vocabulary.

“People used to say, ‘you moved from Mexico why don’t (you) have an accent?’ Well my mother didn’t speak Spanish so being able to enunciate was fine, but I couldn’t write and I struggled with being able to read and really understand,” Yorba said.

That struggle was also there with Spanish for Yorba because when she began to work as a customer service representative she realized that she was not familiar with using a formal tone that is common among Spanish speakers.

Yorba overcame both those language barriers and as she rose through the ranks she began to see a need for bilingual employees that could communicate with customers of the water agency.

And during her time at the Sweetwater Authority, she has made changes to meet the needs of the community.

“I think that’s what Sweetwater is all about, it’s ensuring that our customers know that we are here to help them,” she said on their role as public servants in the water agency. “There is a very high standard that goes within being a public servant.”