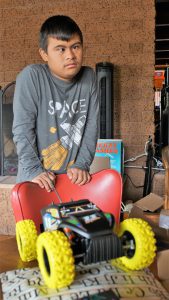 Maria Luisa Caceres, who goes by Doña Mary, sat on an Otay Mesa sidewalk and wept as she held her son while he was having a seizure.

Javi, her teenage son with Down Syndrome, was shaking uncontrollably. Moments ago, he had passed out; it had been more than 24 hours since they last ate, after spending four days at the Otay Mesa Detention Center. That night, officers had told them to get into a van already loaded with other families.

Mary retells how the officers suddenly stopped the vans, opened the doors, and told the families to get out and walk in a particular direction. Some time went by before Mary realized that they were finally on a street in America.

One after the other, the families released with Mary and Javi made calls, people came and got them, and they left. They at least told Mary where she could find a payphone and get assistance in Spanish.

“Hello”, Mary said in Spanish to Javi’s father when he picked up the phone from his home in Denver, Colorado. “Immigration has let us go, but we need you to come pick us up.” “No,” replied her now ex-husband, “I will not put my new family at risk to go pick you and your son up. You figure out what you’re going to do.”

This was the same man who had abandoned Mary when Javi was just two-days old, only now the situation for the Honduran mother and her son was even more dire. She and Javi were all alone, without money, without knowing anyone, sitting on a sidewalk with no idea as to where Otay or Denver are. It was the wee hours of the morning, and the few people who passed by spoke only English. So, there they were, cold, tired and hungry, and with Javi getting worse.

Mary says that a cab driver came up, and without saying anything he took of his jacket and covered Javi – who was on the verge of passing out – with it. The cabbie must have realized that Mary was wearing an ankle bracelet as some of the few pedestrians walking by became curious. They had left the Detention Center hours before.

Mary remembers hearing one of the curious passersby, a pregnant woman, say something in Spanish, so she asked her for help.

“Alright, mamma, how can I help you?” asked the young expectant mother, trying to calm the weeping mother.

Other than Javi’s father’s phone number, the only other number Mary happened to have with her was that of another young woman who was part of an immigrant advocacy group in Mexico City. However, because it was so early in the morning, it wasn’t until the fifth time she called that the young Mexico City woman picked up.

“That’s awful” said the young woman in Mexico. While on the phone, she asked the pregnant woman to please help them while she could find other help in the U.S. The Otay Mesa woman not only agreed to stay with Mary and Javi while this happened, but even used some of her food stamps to get them something to eat.

Calls went out from Mexico City to New York, then from New York to San Diego, and finally, someone came to get the Honduran mother and son.

At a home where they were taken in, Mary shares that life in Honduras was unbearable for them, so when she heard that a caravan would be leaving from San Pedro Sula bound for the United States, she didn’t think it twice.

Javi grew up in a hostile environment, surrounded by cruel children and adults who made fun of him and harassed him because he had Down Syndrome. There was no end to the abuse. Javi does not realize at times, but at others he suffers. He is very loving, generally greeting people with a hug instead of just saying “hi” and smiles at the slightest provocation.

His condition made the 4,500-mile journey to Tijuana all the more difficult. He would get sick, pass out, relapse. Mary, worn out from caring for him, also got sick with a respiratory infection. She had received care and been given antibiotics along her way in Mexico City, but they had run out weeks ago, back when she was left in Otay Mesa. They are scheduled for a hearing at the end of the month, and her attorneys believe that Javi-and her as his mother-will likely be allowed to stay so that Javi can escape the harassment and discrimination.

The good will of strangers continues to bring them surprises. Apparently, someone found out on social media that Javi loves toy cars, so he or she anonymously sent the Honduran teen the first gift he has ever gotten: a remote-control car, which he now plays with incessantly.

According to San Diego nonprofits, about 500 families, most of them Central American, have been conditionally released by Immigration and Customs Enforcement (ICE) and left on the streets from November to date.

Immigrant advocacy groups in San Diego are working with local police so that officers can let them know when they come across families like Mary and Javi, released and left to their own devices.