Justice Department Must Work Faster to Reunite Thousands of Families 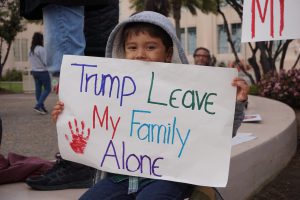 The U.S. government has already missed the deadline imposed by a federal court for reuniting just over 100 children under 5 who were separated from their parents at the border, and is now working against the clock to do so for the over 2,000 children who remain in their custody.

San Diego Judge Dana Sabraw gave the Administration until Tuesday, July 10 to reunite all children under five years of age with their parents, and until July 26 for the remaining minors ages five through 17 who were separated as a result of the White House’s “zero-tolerance” policy for undocumented immigrants.

However, as of Thursday, only 57 of the 103 children separated at the U.S.-Mexico border had been reunited.

In court hearings, it was established that only 75 of the 103 children could feasibly be reunited within the deadline, since the parents of the other children either faced criminal charges or had already been deported, making their reunification process longer.

Sarah Fabian, an attorney for the Justice Department, told the judge that the delays were due to having to wait for DNA results; however, Judge Sabraw asked the government to simplify their process for investigating the parents to ascertain that the children are in fact theirs.

The American Civil Liberties Union, which filed the lawsuit on behalf of immigrants whose children were taken away, believes that the reason the reunification process is taking so long is rather that the government had no plan at all for reuniting the separated families.

“Not only did (the government) separate children from their parents, they didn’t even bother to set up a system to track the families,” said Lee Gelernt, deputy director of the ACLU’s Immigrants’ Rights Project.

In his opinion, it was only because a judge got involved in the process and made it clear that the court-ordered deadline would not be modified that they began to see “progress” by the government in reuniting all these families.

“We agree with the judge in that it seems that things are now going in the right direction, but we will be monitoring every day,” he added.

The Administration has defended the use of DNA testing, stressing that it is necessary in order to guarantee the children’s welfare.

In the meantime, both sides will be back in San Diego court this Friday, when the government will have to justify the delay in meeting the first deadline, as well as show how they plan to reunite the other 2,000 children by July 26.

All the while, human rights’ advocates have been speaking out against the separation of families, a practice that has been ramped up since the implementation of the “zero-tolerance” policy.

“If (the lawsuit) hadn’t happened, this Administration may have come after these communities even harder,” expressed Benjamin Prado of the American Friends Service Committee. “This at least halted it significantly and is ensuring that families are reunited.”