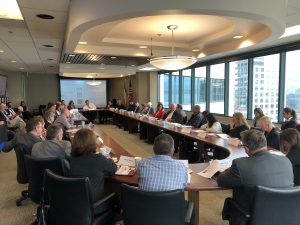 A group of local leaders wants to improve the existing collaboration between water agencies and the different levels of government to take advantage of all the water resources available to the region.

This was one of the ideas talked about in a cross-border business forum organized by the San Diego Regional Chamber of Commerce at their downtown headquarters on Wednesday, May 30.

“This meeting was a great forum to exchange ideas about the Colorado River and other water cooperation that we can have between the U.S. and Mexico. The San Diego County and Baja California in Mexico have more of a regional economy, so we work together more regional in the water supply. The topic also involves both our federal governments, so we talked about how do we raise awareness to our federal governments to get more cooperation and realization of some of the issues including the Tijuana River and the Colorado River,” said Mark Watton, general manager at the Otay Water District, who was one of the main speakers at the cross-border business forum. “I think there is a good collaboration with the federal government through the U.S. International Boundary and Water Commission. The commissioner appointed by President Barack Obama, just left, so we’ll see what does the new administration under appointment, so that’s a little bit of mystery there, but that’s been a very great forum. And the collaboration as far with the local officials is been more spotty, is not as organized, and I think we can be more organized that way, so I look forward to that.”

The cross-border business forum included the participation and presence of leaders of both sides of the border including Carlos de la Parra, research professor at the Department of Urban Studies and Environmental Planning at Colegio de la Frontera Norte; Jeffrey Kightlinger, general manager and CEO at the Metropolitan Water District of Southern California; and many more.

Another of the ideas talked about at the meeting included the creation of a coalition were water agencies from the U.S. and Mexico, as well as government entities gather to share planning documents.

“People don’t realize on the U.S. side is that on the Mexican side, water agencies have a very a sophisticated planning process, they have all the same plans that I have at the Otay Water District, so the idea is how do we merge and talk about those plans,” said Watton to La Prensa San Diego. “I think this is a wonderful idea and something that we don’t do but we should.”

“This idea was spontaneous and comes out of the forum but it follows a pattern that we have seen working in this region. We have seen officials working through SANDAG and between California and Baja California for a joint transportation plan,” said Moreno Ducheny to La Prensa San Diego. “For me, when we talk about the integrated regional planning for Southern California, I think we need to add Baja California to this discussion to be a participant. And it’s a more complex discussion because we need federal and state government agencies, but it’s a way of looking at things to adapt to the region. And also as a way to integrate all the issues of the Tijuana River with the Colorado River, because for me, it’s all a region in that sense.”