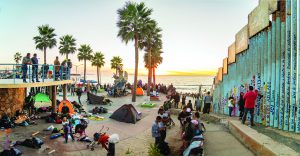 On a cold afternoon under a cloudy sky outside el Barretal, the main migrant shelter in southeastern Tijuana, an older couple, Rosalba and her husband Walter (who requested his name be changed) stand together watching a group of migrants pick out donated clothes from a dark grey truck with California plates.

Rosalba, with dark circles under her eyes and a solemn tone of voice, sounds as if she is speaking of someone else when she explains why she and her husband joined the caravan “So many things that happen to us in life, maybe one thinks about improving them, but at the end of it all, I don’t know what the final result will be.”

On New Year’s Eve, Rosalba recalled the couple’s money was stolen along with their cell phones, “We celebrated the New Year with our arms crossed. Only our lives they have not stolen,” she said.

The couple from El Salvador said they have been left without a way to communicate with their children, who remain in their home country. Her eyes briefly close and open when she explains they have no money to buy anything.

When asked about life in El Salvador, Rosalba said it’s too painful and she prefers not to talk about it. Rosalba and her husband joined the migrant caravan to seek asylum in the U.S. If they make it, their plan is to work and help their family in El Salvador.

With the new year here, Rosalba said she’s worried about their chances of securing asylum. “It’s the plan, but only God will decide what’s the best. We can think one thing, but what actually happens could be another. We are still here and it’s a new year, we’ll see what happens.”

“The government doesn’t want us in the United States. It’s cruel,” Rosalba’s husband said. “God did not create borders. He created everything open, free. Liberty is the most beautiful thing.”

Rosalba and Walter’s comments come as President Trump continues his rhetoric, pushing for tougher asylum and immigration policies, funding for a border wall, and returning troops to the southern border.

“We feel bad here, you know,” Rosalba’s husband said. “Why, because sometimes they tell us they are going to take us to a different shelter and we don’t know where we are going to go.”

Walter explains they were given a humanitarian visa, but it doesn’t allow the couple to work. He said they are asked for a number of documents they don’t have, “So we can’t start to work. So what are we supposed to do with the credential they have given us? Just a tourist. We are not tourists. We are pilgrims. We came in search of something better for our families.”

“Because one goes out to venture, to suffer, to throw out your hand to help your family. It’s not because you want to. It’s because of necessity in search of a better dream. Not because of us because we are old. But we are of respect. We do it because of our family.” He pauses before speaking again with tears in his eyes, “When one thinks about how the family is over there. That’s why you come. That’s how life is.”

“You come here as an obstacle and it hurts, it hurts a lot,” Walter said.

The migrants remaining at El Barretal, the temporary shelter set up for the thousands of people who walked to Tijuana from mostly Central American countries, say there are over one thousand migrants left. They also said some of their companions decided to cross into the U.S. illegally through the mountains or other ways, some returned to their home countries, and others left to process their asylum claims.

About 20 minutes before the grey American truck pulled up, a small white car was parked in front of the shelter, also with California license plates.

Marlo, who came with the migrant caravan from Honduras with his wife and daughter, also watched as others took clothes from the trunk of the small white car.

“It was tough walking all the way from Honduras,” Marlo recalled. He said his wife and daughter already made it into the U.S. after he paid someone to cross them illegally and he was just days away from his turn to request asylum.

Marlo, who was already deported into Honduras from the U.S., said he needed to try and request asylum, even though he was aware he could get deported again.

“My wife and daughter are in the United States. I can’t leave them alone. If they deport me, I will try again. I have to get back to them. And I have other children in Honduras I have to help,” Marlo said.

Twenty-three-year-old Danny from Honduras was standing near Marlo. He’s been in Tijuana for approximately a month and a half and joined the caravan in Chiapas, Mexico.

“I could not get here without the caravan,” Danny said, adding he could have gotten arrested because he is in Mexico illegally. Like many others, he is waiting for his turn to request asylum to America.

“Honduras is beautiful. But life gets complicated. There’s a lot of drug dealers and sometimes they want to obligate you to sell drugs,” Danny said of his life in Honduras and his decision to leave.

Eighteen-year-old Jiro Josue who also came from Honduras stood out wearing a Raiders baseball cap and held a red water gun toy along and a small yellow happy face pillow in between his hands.

“They assault you, they steal from you, kill you,” he said describing life in Honduras. “I decided to leave to help my parents.” He said he was 12-years-old when he last saw his mother and father and spent several years in Mexico.

He doesn’t have a number to request asylum and did not explain a clear plan of what he was going to do or where he was going.

“It’s not going to work for me. They’re just going to put me in a detention center. Locked up. I don’t like that. That’s the problem,” he said about the asylum process.

Someone walked over to Renan, who was pushing a stroller with two toddlers inside and a small luggage attached to the back side of the stroller to give him children’s clothing. He also came from Honduras, but said he separated from the caravan after hearing stories of abuse, but added Mexican people helped him get to Tijuana.

“It’s been hard, hard,” he said about the journey. “Walking, hardly sleeping, the cold, but thank god we made it because a lot of people didn’t make it, some died, some were abused, some were sequestrated, some got lost.”

“In my country, they wanted to kill me, my family,” he said as tears filled his eyes. “That’s why I came because of my children. You don’t want anything to happen to them. They’re little.”

It’s difficult to understand some of his words because he is overcome with emotion as he speaks.

“If god permits, I’ll make it. I’m a fighter and I am against the Maras, I’m running from them. They killed one of my cousins. I don’t want them to kill me. They threatened my life. It’s hard,” Renan said.

Renan adds he’s just about two weeks away from his number being called to apply for asylum.