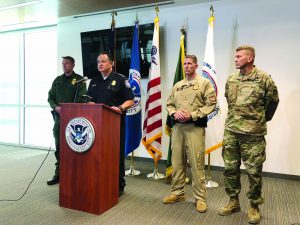 Over 1,300 military personnel arrived at the California-Mexico border, including San Diego Ports of Entry, ahead of the arrival of a migrant caravan originating in Honduras.

The troops arrived a few days before the migrant caravan reached Tijuana on Sunday, Nov. 11, in order to secure the border and assist U.S. Customs and Border Protection (CBP) officers and Border Patrol (BP) agents.

“CBP has been and will continue to prepare for the potential arrival of thousands of people migrating in a caravan heading towards the border of the United States,” said Pete Flores, director of CBP Field Operations in San Diego. “These preparations include training exercises, deploying additional CBP personnel, and partnering with the U.S. military to harden our ports of entry and the border area between those legal crossings into the U.S.”
Department of Defense personnel installed concertina wire, and pre-positioned jersey barriers, barricades, and fencing as requested by CBP under Operation Secure Line.

The presence of military personnel at the border is temporary, but the number of troops is expected to grow, before they all leave the border on December 15.

“We are here at the border in a temporary mission, we are staying here until Dec. 15,” said Jeffrey S. Buchanan, U.S. Army lieutenant general, at a press conference held at the San Ysidro Port of Entry.

A complete closure of the San Diego ports of entry is in consideration if the migrant caravan heads to the port as the same way the migrants crossed the border from Guatemala to Mexico, by pushing through.

“We are planning ahead for all contingencies, and with the help of the Department of Defense, we started to talk about on how to strengthen the ports of entry,” Flores added. “We have all the contingencies on the table to control the access at the ports, it can be by setting a pathway where people can cross, to a suspension of operations to a full closure, it all depends on the setting we have in front of us.”

A partial closure initiated on Tuesday, Nov. 12 at the San Ysidro and Otay Mesa ports of entry.

At least three northbound vehicle lanes at San Ysidro and one lane at Otay Mesa were closed to install and pre-position port hardening infrastructure equipment in preparation for the migrant caravan and the potential safety and security risk that it could cause.

“CBP officials in charge at our local border crossings must always maintain security while we work to efficiently process legitimate trade and travel into the U.S.,” said Flores. “The materials will be used to help strengthen border security, to ensure the safety of the American people, the traveling public, CBP personnel and the communities in which we serve.”

CBP will provide an update when the materials are removed and the lanes re-opened, however it is not anticipated to take place until sometime after people in the caravan arrive to the border. CBP officials recommend that persons traveling northbound to the U.S. anticipate possible increased wait times because of the lane closures.