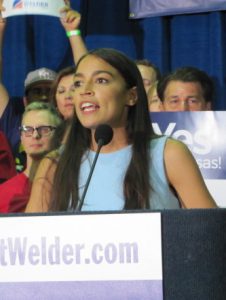 In a time when the country is divided, minorities and women who ran in record numbers secured major wins across the nation.

For Latinos the Associated Press reports the number of Latinos serving in Congress is increasing to at least 41 in the new year and that 33 out of 44 Latino Democratic candidates won election in Tuesday’s elections, while six out of 15 Latino Republican candidates claimed victory.

The youngest woman ever elected to Congress is Alexandria Ocasio-Cortez, a progressive political newcomer who unseated a 10-term member of Congress and whose early victory in the primary energized progressive voters not just in New York, but all over the U.S.

In Texas no Latinas had ever represented the state in Congress until this week’s elections. Veronica Escobar a former El Paso County Judge will be the new voice of the 29th Congressional District on the border with Mexico. Escobar was elected in spite of the anti-immigrant rhetoric during the election. Sylvia Garcia also secured a spot in Congress in a majority Hispanic district which has always been represented by an Anglo.

Earlier this year the Brookings Institute reported new statistics from the Census Bureau project that the nation will become “minority white” in 2045.

Among the newly elected some will represent districts that are majority white and have been historically conservative, their victories a rejection of conventional wisdom on electability and the effects of gerrymandering that have historically assigned elected officials of color to represent minority communities, according the newspaper, The Daily Telegraph.

In both Minnesota IIhan Omar and Michigan Rashida Tlaib the first Muslim women were voted into Congress. Omar is also the first Somali-American to serve on the House of Representatives. Tlaib, a Democrat was unopposed in a majority African American district. She told the Telegraph she credited women and first-time voters.

Kansas and New Mexico elected the country’s first Native American women Sharice Davids and Deb Haaland to the House of Representatives. Davids a Democrat, is also an attorney and former MMA fighter according to the Huffington Post. Davids is also the first openly LGBTQ member of the Kansas congressional delegation. Haaland is also a Democrat and has a long track record of public service and said she is the first Native American woman in the country to chair a state party.

Massachusetts elected the first black congresswoman, Ayanna Pressley. Pressley a Democrat and sexual assault survivor spoke up during the Brett Kavanaugh confirmation hearings. She was also the first woman of color elected to the Boston City Council.

Newcomer and progressive Summer Lee won a state house seat in Pennsylvania. The Huffington Post reports she is the first black woman to represent the southwestern region of the state in the legislature.

Jared Polis from Colorado became the first publicly gay candidate to be elected as governor in the U.S.

In Florida Democratic challenger Debbie Mucarsel-Powell a Latina from Ecuador unseated Republican Congressman Carlos Curbelo a Cuban-American by one percentage point according to ABC News in a district that was carried by Hillary Clinton in 2016.

Lauren Underwood an African American registered nurse was among those gaining the title “House Flippers,” by the Chicago Sun Times this week for beating a four-term Republican Congressman Randy Hultgren in Illinois. It’s the first time Underwood runs for office. She won in a district that is 86 percent white and had never sent a woman or a person of color to Congress. In an interview with MSNBC’s Rachel Maddow, Underwood said healthcare will be her top priority.

In Ohio Anthony Gonzalez, a grandson of Cuban exiles, will be the first Latino to represent the state in Congress according to the Associated Press. NBC News reported this month the district’s population is 94 percent white and that Gonzalez campaigned as a practical conservative willing to work across the aisle.

In New York the Huffington Post reports Antonio Delgado faced racist attack ads by Republicans including one over Delgado’s brief career as a rapper, but none of those efforts stopped the Rhodes Scholar and first time Democratic nominee from winning a seat into Congress.

In Illinois Jesus “Chuy” Gonzalez a Democrat won the seat to replace Rep. Luis Gutierrez in a district where over half of the voters are Latino.

With these gains it remains to be seen if the voter enthusiasm will maintain through the 2020 presidential election.