Organizations Show with Numbers There Is No Crisis at Border 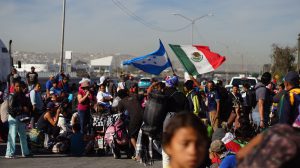 Organizations such as the Southern Border Communities Coalition reject the Trump administration’s version of the humanitarian and national security crisis which warrants a shutdown of the border.

Vicki Gaubeca, executive director of the organization representing over 15 million Americans along the border, said that “the Border Patrol’s apprehension rate remains at historic lows.”

In 2017, the Border Patrol’s apprehension rates reached levels similar to those in 1971, almost half a century later, when there was only a fraction of the agents now watching the border. In the last two years, the numbers have not changed noticeably.

“As a matter of fact, the majority of people that look to enter through our border are families and children that flee dangerous situations and put their lives at risk looking for asylum which they are legally entitled to,” Gaubeca said.

The American Civil Liberties Union (ACLU) informed on its own that the that the numbers presented by the Department of Homeland Security and Customs and Border protection are incorrect.

The majority of people crossing the border irregularly are “vulnerable families and children with turn themselves into Border Patrol officers, as the first step to seek asylum,” according to the ACLU. “Frightened and vulnerable people find themselves forced to either wait for months in dangerous conditions or cross the border between customs checkpoints and look for agents of the Border Patrol to turn themselves into.”

The Border Patrol released a statistics chart showing that in the last months, after the arrival of the latest migrant caravan , apprehension rates per month floated around 51,000, but starting this January they shot up.

Although the chart points to apprehensions, in reality these are almost all immigrants looking to turn themselves into officers, they are not undocumented individuals running away from the Border Patrol.

According to these numbers, a day this past February recorded the most ever apprehensions (or voluntary turn ins) the last 10 years, with 3,700 people, mostly entire families and unaccompanied minors.

Other numbers show in 2000, when the number of Border Patrol agents were less than half than of today’s agents, an average day yielded a count of 4,383 migrants detained, who were undocumented and fled from agents rather than turn themselves in.

In March of 2000, for example, Border Patrol detained 220,000 persons, without the need to cram them into fenced spaces as can be seen in current photos.

The previous statistics come from the Border Patrol, but in other charts, such as one by FactCheck.org, one can observe a gradual diminishment until these last months without any upticks.