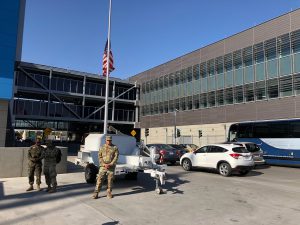 Although it’s been more than 100 years since Pancho Villa set foot in the US, the old revolutionary general was used this week as justification for militarizing our border with Mexico.

During the last few weeks before the midterm elections, Donald Trump couldn’t stop talking about the migrant caravan heading north from Honduras and labeled it as an imminent invasion of the US to gin up votes among Republicans. He claimed, without any evidence, that ISIS fighters and unknown Middle Easterners were imbedded among the people mostly walking the 2,000 mile trip through Mexico.

Those migrants, it’s assumed, are working their way toward the US in hopes of seeking asylum and refuge from the many dangers they face back home.

Just before the election, Trump ordered active US military troops to the border as a show of force against the migrants that were still at least 1,000 miles away. The “threat”, though, consists mainly of women and children fleeing horrific conditions in Central America.

In the election, voters turned against Trump and his divisive approach to politics, and instead voted for Democrats in overwhelming numbers, resulting in a flip of 35 districts from Republicans, and handing Trump an embarrassing defeat with Democrats regaining control of the House of Representatives.

But, since last week’s elections, Trump has been relatively muted about the caravan. This week he sent his Secretary of Defense, retired Marine General James Mattis, to tour the troops at the border this week along with Homeland Security Secretary Kirstjen Nielsen.

Most people now believe that the troop order was nothing more than a political stunt from a president desperate to shore up his voter base. In the end, though, it didn’t work and now the deployment seems like just another blunder for Trump.

So, when General Mattis was asked during his visit at the border about the rationale for having troops there, he scrambled to come up with a comparison to justify that this is not the first time troops have amassed along the frontier.

General Mattis claimed that this deployment is similar to when the US Army mobilized at the border in 1916 in response to threats from Pancho Villa.

Yup, that’s right, he had to reach back 102 years to find anything close to what Trump is trying to do today, and even that comparison, is wholly different.

The irony of the argument is that the 1916 Army deployment was called the Punitive Expedition because it was organized solely as a retaliatory move, not a defensive one as the current one claims to be.

Mattis is referring to the order by then-President Woodrow Wilson to send Army Lt. General John Pershing into Mexico to hunt down Pancho Villa after the Mexican revolutionary general and his men attacked the city of Columbus, New Mexico, and its Army post, on March 9, 1916.

During the attack, Villa’s men killed eight American soldiers and ten civilians, and stole guns, ammunition, horses, and supplies before escaping back into Mexico.

In retaliation, Pershing led 6,600 soldiers into Mexico in what he expected would be a simple mission. The expedition included the first use of motorized vehicles in a US military operation, as well as a relatively new weapon; airplanes.

After about two months, though, Pershing’s expedition ultimately ended in frustration after being run in circles by Villa and his forces. In the end, the emerging Mexican military threatened to fight the Americans if they didn’t retreat.

Pershing wrote that he was “outwitted and out-bluffed at every turn” by Villa, and that “having dashed into Mexico with the intention of eating the Mexicans raw, we turned back at the first repulse and are now sneaking home under cover, like a whipped [dog] with its tail between its legs”.

Pershing’s expedition has now become known as the Mexican Expedition because it sounds more like a treasure hunt than the revengeful incursion that it truly was.

To many, it symbolizes the negative attitude that the US has had against Mexico in the past, and has again under President Trump.

The caravan of migrants currently in Mexico is not an imminent national security threat as Trump proclaimed. We have over 16,000 Border Patrol agents deployed along the Mexican border who have primary jurisdiction for immigration-related arrests and detainments. For nearly 100 years, the Border Patrol has maintained peace at the border without the use of military troops to fight immigrants.

In fact, under federal law, the military cannot directly apprehend suspected undocumented immigrants. During the deployment of both National Guard units, as well as the current military troops, soldiers can only perform support roles like drivers, mechanics, and building fences and erecting barb wire. The image of troops with rifles standing watch at the border is a political myth.

This week, the first wave of migrants reached the Tijuana border, but, it wasn’t thousands of people, it was a few hundred, and they didn’t storm the border fence as Trump suggested they would. More migrants are expected to arrive in Tijuana this weekend and into next week in what is expected to total about 3,000.

When they arrived at the border this week, many migrants were surprised by the size of the border fence and the heavy Border Patrol presence. One woman said it looked like a scene from a movie.
But, it wasn’t the military that kept them from crossing. The caravan migrants are hoping to present themselves legally at the border and apply for asylum, as allowed under US and international laws. No one is storming the fence or causing a riot.

The movement of displaced people is happening all over the world, not just along our border. For many years, countries have been dealing with migrants seeking refuge from war, poverty, and violence, and taking people in through their own legal process.

There is not a revolution at our border. Pancho Villa is not riding his horse across the border to raid our cities. We are not at war with Mexico.

We are better than this.

We should act like to world’s richest superpower that we are, not like a backward protectionist country led by a military strong man. That’s exactly what the caravan migrants are fleeing.