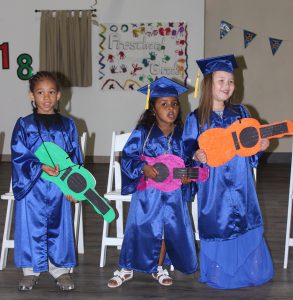 A group of children affected by homelessness wore caps and gowns for a preschool graduation ceremony at Father Joe’s Villages.

Children who are homeless are four times as likely to have developmental delays and twice as apt to repeat a grade in school. By offering vital programs like its therapeutic childcare center, Father Joe’s Villages provides young people the tools they need to help prevent homelessness in their adult lives.

Most of the graduates were current or former residents of Father Joe’s Villages, whose families are working to overcome homelessness.

One of the students was 5-year-old Viviana King, who was teary eyes at the beginning of the graduation ceremony as she was a little intimidated by all the parents and cameras present to celebrate her new journey to kindergarten.

“My daughter can now read as a first grade student, this wouldn’t be possible without the help of this program,” said Kristina LeMoine, mother of student Viviana King, in front of the teachers and parents present at the ceremony. “I’m not a resident of Father Joe’s Villages anymore, but I wanted to let my daughter finish this program because it is a good program.”

Viviana and the rest of the young graduates, walk through a mini-hallway between the parents while “Pomp and Circumstance,” the song heard during graduations, played while they received a colorful diploma with their name on it.

The graduation ceremony also had a Disney Pixar’s “Coco” theme and each of the graduates held a cardboard guitar and had a moment to sing and dance to songs from the movie.

“I decided to put my daughter in the program so she could be preschool ready and then be ready to enter kindergarten. My daughter was very excited to participate in this program, she was one of the most helpful students,” said the mother of one of the students, Kassie Cajuelman to La Prensa San Diego. “We’ve been looking for housing for over a year and we are getting ready for the transition to have our own household. It’s really hard to find affordable housing in San Diego.”

The children that graduated went through a year round program that even included summer trips to local beaches and parks.

“We are therapeutic childcare center so we do what is best for the kids. If we don’t have this type of program, our kids lose out because they stay on the street or on a routine that they are only familiar with, and that is created by adults that aren’t familiar with higher education,” said Mark Galindo, a program teacher and the event’s master of ceremonies.

“While we are here, we don’t only provide the threshold to walk into a classroom but it welcomes them into a routine. They know when they come to our school that they are in a safe place. They have their snacks, meals, love, kindness, and education. And at the end of the day, when they go home, they may not know where are they going to sleep, but once they are established in a routine, they thrive,” he added.