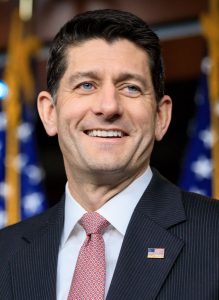 The recent headlines about a huge Democratic takeover of the U.S. House of Representatives after the midterm elections were big news as Donald Trump will, for the first time in his term, face real opposition from Congress.

Nancy Pelosi became Speaker of the House again, after having been the first woman speaker when she served between 2007 and 2011, also stole the news coverage in the past two weeks.

But one story that was overshadowed was the Republicans in the House that lost elections or decided to retire, especially the outgoing Speaker of the House, Paul Ryan.

Most remember Ryan as the young candidate for Vice-President on Mitt Romney’s failed 2012 presidential campaign.

More importantly, Paul Ryan was a wonder-kid from Wisconsin first elected to Congress in 1998 when he was only 28 years old, who held his congressional seat for 20 years.

For his first few terms, Ryan set himself apart as a deficit hawk, hardlined against excessive government spending and unbalanced national budgets.

Even before he became Speaker, Ryan was the House Budget chairman and outlined his plan for tax cuts, reduced federal spending, and even a constitutional amendment requiring a balance budget.

But Ryan also voted to support the wars in Iraq and Afghanistan, George W. Bush’s tax cuts and anti-terrorism spending, and was a big cheerleader for Donald Trump’s massive tax cut for the rich that the Congressional Budget Office estimated will add $1.5 trillion to the national debt.

Ryan also proposed more tax cuts that didn’t pass but would have further reduced revenues by an estimated $6 trillion.

In fact, the National debt increased from $7 trillion when Paul Ryan was elected, to nearly $22 trillion as he left office last week.

Ryan is often referred to as a “deficit hawk” and he even referred to himself in the third person that way when he said “Paul Ryan Deficit Hawk knows you have to have a faster-growing economy, more jobs, bigger take-home pay” during a Fox News interview in 2017.

He may call himself a deficit hawk, but the truth is Paul Ryan and his Republican majority in Congress grew the national debt more than Democrats did in the past 20 years.

For all his crowing about excess government spending, Ryan was an accomplice to the huge growth in debt.

Then, after 18 years in Congress and countless speeches about fiscal discipline, Ryan met someone he couldn’t control, manage, or even negotiate with: Donald Trump.

During the 2016 campaign, Ryan was not a big Trump fan and refused to endorse him early in the primaries. Ryan waited until a month after Trump had clinched enough delegates to win the Republican nomination before actually endorsing him.

No sooner has Trump won, though, when Ryan became a lapdog for the seemingly rudderless president. Although Trump promised everything to everyone with little policy specifics to deliver on them, Ryan dutifully supported the new president on tax cuts, increased military spending, and even trade tariffs that Ryan knew, or should have known, would explode the deficit.

During the past two years, Ryan mostly watched as Trump ran the national debt clock up to new records, which on Ryan’s last day as Speaker, topped $21.9 trillion, a nearly 7 percent increase from last year’s record.

The annual deficit, the thing Paul Ryan supposedly hates sat at a record $852 billion on Ryan’s last day in office, and is expected to hit $1 trillion per year by 2020.

Not once during the past two years did Paul Ryan and his House Republican leadership raise the issue of the expanding national debt in their fervent support of Trump’s tax cuts.

When the nonpartisan Congressional Budget Office warned that the tax cuts would add $1.5 trillion to the U.S. debt, Ryan reverted to the old promise of trickle-down economics to defend the huge reduction in tax revenues.

Paul Ryan decided not to seek re-election during the 2018 midterms. He said he wanted to spend more time with his family. Maybe that’s true.

But it’s hard not to see Ryan’s complete and total capitulation to Trump’s brand of Republicanism as a crushing defeat for a one-time superstar among young conservative politicians.

Not one is still in office today.

They were all left behind in the dust by Donald Trump and the new version of the Republican Party:

Tax cuts for the rich. Increased spending on the military. Even a few billion here and there for a border wall no Republican will admit won’t work. No regard for the national debt.

The emperor has no clothes, but Paul Ryan and his friends didn’t have to guts to speak up. So they left, with tails between their legs, and abandoned their principles along the way.

Now, their kids and grandkids (and ours) will be saddled with trillions in debt because they didn’t have the courage of their convictions.

They came in making lots of noise about what they would do, but left Washington, D.C. very quietly last week when they could not longer deliver on those promises. They gave in to the snake oil salesman.

Shame on them. And good riddance.