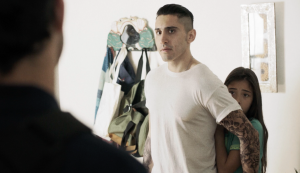 A pot of food is still cooking on the stove while Immigration and Customs Enforcement agents look for the undocumented mother of a young man who served in the United States military.

This is the story of “G.I. Jose” in Alejandro Marquez Vela’s newest short film that is set to screen in the upcoming GI Film Festival San Diego.

“G.I. Jose” tells the story of a young man who just returned from deployment and is placed in a difficult situation where he must decide between protecting his family or following the laws of the country he swore to protect. The short film also explores the concept that a person who is of age to serve in the military, still cannot give his family citizenship because he is not 21.

The film’s director Marquez Vela spoke to La Prensa San Diego about the inspiration behind the film and why he wanted to focus on the point of view of families who live in the United States.

Originally from Guadalajara, Mexico, Marquez Vela said he often saw movies about immigration from the point of view of people who are from Mexico, but he wanted to explore the stories of families who live in the U.S.

“I began to hear stories from the families that are already in the (U.S.) and people that had already crossed the border and had already had their children and family here, and the kind of stories they were living,” Marquez Vela said.

While the topic of immigration and family separation has risen in political conversation, stories like that of Marquez Vela’s main character Jose are not completely fictional, however they are underrepresented in mainstream media.

Marquez Vela said it is an honor to be a part of the festival especially because the short film explores a social issue such as immigration.

“It is an honor because I know these kinds of festivals are only just about showing film but also about showing films with a purpose,” Marquez Vela said. “It is double gratification to be a part of the GI Festival.”

The GI Film Festival San Diego features films that tell the stories of underrepresented individuals in the military.

“G.I. Jose” will screen on Friday, Sept. 28, during the festival, which runs from Tuesday, Sept. 25 to Sept. 30 at the Museum of Photographic Arts in Balboa Park.

Marquez Vela said he hope that the greatest takeaway for those who watch the film is that there is always a better way to solve conflicts.