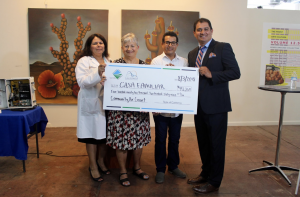 At an August 3 press conference held at The Front Gallery in San Ysidro, Mary D. Nichols, the Chair of the California Air Resources Board (CARB), presented a $492,269 check to Casa Familiar to fund a program to collect air quality data, share it with local, state, and federal stakeholders, and create future solutions to improve air quality in this border community.

The grant is one of 28 grants totaling $10 million as part of CARB’s statewide Community Air Grants program, funded by California cap-and-trade revenues. California’s cap-and-trade, market-based regulations sets a firm cap on greenhouse gas emissions (GHG), a cap that is decreased 3 percent each year to help the state reach 1990 emissions levels by 2020 and 80 percent below 1990 levels by 2050. The trading of capped GHG allowances encourages investments in clean technology and innovation.

For Casa Familiar, the CARB grant is an opportunity to address long-standing concerns for air quality that are unique to San Ysidro.

“Our immediate proximity to the busiest land border crossing in the world makes San Ysidro a special place, but it also creates special air quality challenges for our communities,” said David Flores, Community Development Director for Casa Familiar. “This grant allows us to continue to expand the air quality monitoring program that we started many years ago with the help of San Diego State University, University of Washington, and California’s Office of Environmental Health Hazard Assessment, and to share its data with agencies and San Ysidro residents to develop collaborative solutions.”

The grant will support the existing network of 12 air quality sensors in the San Ysidro border region, expand that network to 24, and fund the addition of 100 new ultra-low cost Particulate Matter sensors in 50 new locations to collect indoor-outdoor data and share that data with the community, CARB, the San Diego Air Pollution Control District, and the U.S. Environmental Protection Agency. The data will help to better understand air quality impacts from vehicular border crossings while supporting local jobs and training for air monitoring, identification of air pollution hotspots and episodes, and increased dialog with air quality stakeholders to reduce air pollution in San Ysidro.

One of those stakeholders is State Senator Ben Hueso, who represents California’s 40th Senate District, which includes San Ysidro.

“Casa Familiar has been an invaluable asset to the South Bay community for more than 40 years and has contributed immensely to the incredible growth and vitality of the border region,” said Senator Hueso. “I can’t think of a more deserving or better equipped organization to manage this new program.”

Despite being home to the Port of Entry and to one of the region’s largest retail shopping centers, San Ysidro’s approximately 30,000 residents continue to have unemployment rates that are consistently higher than the County and City of San Diego. Nearly half of San Ysidro residents do not have a high school degree, and according to the U.S. Census, in 2016, 21 percent of the population of San Ysidro lived below the federal poverty level, with some San Ysidro census tracts having as many as 33 percent of its residents living below the poverty line.

Nevertheless, CARB’s grant represents recognition of the empowerment of the San Ysidro grassroots community through Casa Familiar. After touring San Ysidro with Casa Familiar and Andy Carey of the U.S.-Mexico Border Philanthropy Partnership, CARB Chair Nichols said, “This is a new effort to make sure that we are responding to the needs of the community to identify pollution sources that raise concern here locally and to develop solutions.”

Chair Nichols recognized the important work that had been done by Casa Familiar, San Diego State University, the University of Washington, and CalEPA on San Ysidro air quality that set the table for CARB’s Community Air Grant. “This particular project builds on a successful project already being implemented in the San Ysidro Air Monitoring Study, which has been used as a model for others to try to generate data at a local level that is more available and more useful than some of the data that we’ve been gathering in the past.”