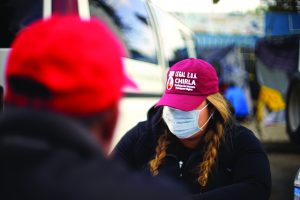 Volunteer immigration attorneys from the Los Angeles area visited Tijuana and helped with hundreds of cases a day during their campaign to aid Central American immigrants, but even that was insufficient to meet the legal needs of all caravan members.

Jorge Mario Cabrera, spokesperson for the Coalition for Humane Immigrant Rights (CHIRLA), explained that, although there are a number of professionals willing to volunteer to help the immigrants, they are limited by their lack of Spanish.

“I would say that between six and seven percent of potential volunteer immigration attorneys can speak and understand Spanish well. We urgently need to find more professionals without that language barrier,” he said.

CHIRLA set up two assistance booths: one at the Benito Juarez sports complex (before it stopped serving as a regular shelter with services), and the other at El Barretal (the new shelter near the Mariano Matamoros neighborhood.

“The fact that we were able to serve more than 100 people per day here [at the sports complex] and many others now also at El Barretal just by ourselves,” shared Cabrera, “gives you an idea of how great the need for attorneys that can understand the migrants is.”

The group advises as many people who want their help as they can, but they focus mainly on the cases that have a better chance of having their petition for asylum in the U.S. approved.

“Most of the people in the Migrant exodus will not ed up getting asylum because they don’t meet the requirements,” said Jorge Mario, “however, every person has the right to due process, to having their case heard, and we fulfill their need for professional advice.”

Cabrera went on to say that when they come across high-probability cases, “we go with them ourselves to the pedestrian border crossing so they can get their process started and – hopefully – stay with them until they’ve been admitted at a U.S. immigration court.”

CHIRLA coordinates with Al Otro Lado (On the Other Side), a border legal aid organization that is more experienced in asylum petitions and in dealing with the Otay Mesa Detention Center and immigration courts in the region.

A growing number of Exodus immigrants are now seeing Mexico as a better place to ask for asylum. They don’t have to face U.S. immigration courts that could deny their petition and order their deportation, and Mexico can provide them long-term work opportunities, authorization to reside there legally, and a culture they are familiar with.

When this happens, Al Otro Lado finds attorneys and organizations to advice the immigrants. However, according to Cabrera, many Central Americans opt for staying in Mexico only after having spoken to professional American lawyers and heard from them that their case in the U.S. would likely be rejected.

“That is, even for those people who have very little chance of their cases being accepted in the U.S. and therefore decide to remain in Mexico or seek out help in other countries, it all starts with legal advice from American immigration attorneys, but we have a pressing need for more Spanish-speaking professionals who can come help,” said Cabrera.