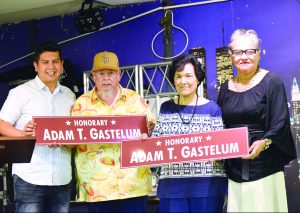 A stretch of Evans Street in Barrio Logan now bears the name of one of the neighborhood’s military heroes.

During a ceremony held at the Veterans of Foreign Wars Post 7420, more commonly known as the Don Diego VFW, an honorary street sign bearing the name of Adam Gastelum was officially revealed and dedicated.

The sign dedication and ceremony was a group effort undertaken by the Logan Heights Veterans Memorial group, comprised of Don Diego members and best known for the creation of the Veterans Memorial Monument on the east end of Chicano Park.

The hour-long event had several guests who shared anecdotes and memories with the audience, including long-time Don Diego members, community residents, and a group of San Diego Police officers, all present to pay tribute to Gastelum.

Adam Gastelum was born in Gilbert, Arizona on August 13, 1923 to a family migrating north from Mexico. He served as a member of the Army during World War II, seeing action in Normandy and central Germany.

He founded VFW Post 7420 in April of 1955, which was originally hosted in a downtown building until its current location at 2100 Logan Avenue was purchased by post members. Since founding Don Diego, he served as post commander and also held several positions throughout the VFW organization at a state level. Gastelum passed away in his home in Logan Heights last year.

Doreen Cruz, Gastelum’s daughter, spoke of her father’s character and why he connected with so many in his community, “He was a person that didn’t care where you were from, he believed in the good in other people, he was inclusive, and believed in the best that everyone had to offer.”

District 8 Councilman David Alvarez was among the invited speakers. He shared with attendees why he believes Gastelum is someone who deserves to be recognized.

“Not only did he believe in his community and in others, but he acted that way and that is what matters, that our behavior and the things we do represent that belief in trying to create a better community. That is what Adam Gastelum stood for,” Alvarez shared.

After Alvarez presented Gastelum’s family with replicas of the sign, attendees stepped out to the street corner where the street sign honoring this neighborhood veteran was unveiled.

Kenneth Robert Martinez is a member of the Logan Heights Veterans Memorial Group. He stood by the sign on the corner of Logan and Evans during the unveiling. He shared with La Prensa San Diego some memories of the honoree and what the recognition means to his comrades.

“When I came back from Vietnam, and got out of the VA hospital, they told me about the club and how it was made of a lot of Hispanic and Mexican guys and Adam was there to welcome me in on my first day,” Martinez Recalled. “The man deserves this recognition we got him because he did a lot of good work in the neighborhood, helped lots of needy people and was a good man.”