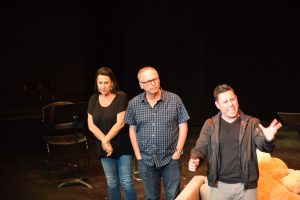 In a dynamic stage concept in which we see the power of language and communication, local playwright Salomon Maya manages to get laughs from his audience in “The Mudanza,” a bilingual play inspired by Vicente Leñero’s “La Mudanza,” in which two groups of people that speak different languages come together.

In “The Mudanza” we meet George and Sarah, an English-speaking couple, who have begun the process of moving into a new home at 3 a.m., in hopes that a change of scenery will help their ailing marriage. Linguistically opposite of the couple are the movers, a team of Spanish-speaking workers who can’t seem to get much right, making this moving day an even bigger headache for the couple and their boss, simply known as “El Jefe.”

Over the course of the day and in a series of flashbacks, we get a look at how George and Sarah’s lack of effective communication, despite both being English speakers, is chipping at their relationship. In that same vein, we see how the moving crew’s personalities and unwillingness to be direct affects their job performance. Things get even more volatile once both parties have to work together across their language barrier.

The language dynamic on display is one which mirrors daily life in San Diego, and one which Maya, a lifelong resident of our binational region, wanted to highlight during a dramatic reading held as part of this summer’s 25th annual San Diego Jewish Arts Festival.

“I have always wanted to touch the subject of language but not in an easy way like seeing the differences between Spanish and English speakers, but rather seeing the language that exists or doesn’t exist in relationships like in a marriage or among coworkers, and what happens when these groups have to speak with each other as well,” said Maya to La Prensa San Diego.

Despite the minimal nature of dramatic readings, in which actors often have their scripts in hand, each actor’s performance was full of confidence. Maya’s portrayal of George is convincing in showing us his frustrations and fears. Stephanie Frid as Sarah covers ample ground in her interactions with the entire cast. Zeji Ozeri, as the mover known as “El Güero”, is full of energy and effectively sets up jokes playing off of the friction and awkwardness between everyone on stage.

The play is directed by award-winning director Pepe Stepensky, who leads Teatro Punto y Coma along with David Chait. Among this Thespian’s works is a rendition inspired by the same source script he staged over 20 years ago. However, Stepensky notes that Maya’s take on the concept is very unique.

“There are no words by Leñero in this play,” said Stepensky. “Salomon did a great job writing a millennial couple with today’s problems.”

The dramatic reading of this script is the final rehearsal before the play’s tentative 2019 run and provided both Stepensky and Maya an opportunity to hear back from audience members on what they like and to adjust for critique and reaction.

Maya says adjusting for language is vital, as audience members often won’t speak both languages or may primarily be English-speaking on the San Diego side of the border.

“We want to see if the people who speak Spanish or English seriously understand (the play). We mostly speak English here but we want to know if those who don’t can still follow what’s happening,” Maya explained.

The director stated that work on the script will be put on hold for a while and will be revisited later this year.

In the meantime, and in the middle of being finalized, “The Mudanza” received great applause from audience members. Stepensky says there is more to come as the final production is developed. “Tonight was basically a little taste,” he teased.