Trump’s Campaign Chairman and His Lawyer Convicted on Same Day 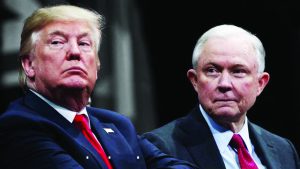 On Tuesday of this week, two of Donald Trump’s former advisors were convicted of felonies that could send them each to prison for years.

A jury in Virginia returned eight guilty verdicts on Tuesday morning against Paul Manafort, Trump’s former campaign chairman, after having deliberated for four days. The jury found Manafort guilty of five counts of tax fraud, two counts of bank fraud, and one count of failing to disclose a foreign bank account. The charges carry a maximum sentence of up to 80 years in prison. The jury deadlocked 11 to 1 to convict Manafort on 10 other counts, so those were dismissed in mistrials.
Just one hour later, Trump’s former lawyer and self-proclaimed “fixer”, Michael Cohen, walked into federal court in New York City and entered a plea deal that convicted him of eight felonies, including two counts of making illegal contributions “for the principle purpose of influencing the election.” Cohen could face up to 63 months in prison. Cohen was released on bail and is scheduled to be sentenced in December.

Manafort’s case centered around tens of millions of dollars he received for political work in Ukraine and connected to Russian oligarchs. The charges included failing to report millions of dollars in income by hiding the cash in off-shore accounts and paying for expensive cars, clothes, and properties through wire transfers directly from foreign banks. None of the charges related directly to Trump.

Cohen, on the other hand, pled guilty to eight counts, but two of the charges related directly to Trump. One conviction was for making an illegal corporate contribution to Trump’s campaign, and another conviction was for making a contribution to Trump’s campaign in excess of the legal limit.
The corporate contribution was related to a $150,000 payment made to former Playboy model Karen McDougal by the National Inquirer, which Cohen says was reimbursed by Trump. McDougal has claimed she had an affair with Trump right after his wife, Melania, gave birth to their son in 2006.

Trump reacted to the convictions in different ways, saying he felt “bad” for Manafort, calling him a “brave man”, but criticizing Cohen as a “liar”.

“I feel very badly for Paul Manfort and his family,” Trump wrote in a Twitter message. “Such respect for a brave man!”, Trump added.

On the contrary, Trump’s only message relating to Michael Cohen was a sarcastic retort.
“If anyone is looking for a good lawyer, I would strongly suggest that you don’t retain the services of Michael Cohen,” Trump tweeted on Wednesday morning.

Cohen had worked for years for Trump and his companies, often being used to negotiate deals for then then-businessman and reality star. When stories first broke about a possible payment to Stormy Daniels, Cohen denied any such payment, but later said he paid her from his own money out of loyalty to Trump. Daniels’ lawyer, Michael Avenatti later detailed how Cohen had used a shell company to make the payment, and further detail later emerged about Trump’s reimbursement to Cohen.

Two weeks ago, Cohen released an audio recording of a meeting with Trump during the election where they discussed the payment to McDougal in conjunction with David Pecker, CEO of the National Inquirer. Trump still maintains he did not know about the payments until “later”.

Late this week, Cohen’s lawyer, Lanny Davis, said Cohen decided to plead guilty to his involvement in covering for Trump after he realized that Trump is “both corrupt and a dangerous person in the oval office.” Davis said Cohen would not accept a pardon from Trump.

Some political analysts believe Trump may pardon either Manafort or Cohen or both to relieve any pressure they may have to testify against Trump in order to secure lighter sentences for themselves, but legal experts caution that pardoning them would remove their ability to plead the fifth in any later legal actions against Trump or any of his other associates or relatives, requiring them to testify fully or face prison for contempt of court.

On Wednesday, Mr. Davis also said he believes Cohen is prepared to testify before Congress without immunity after Congressman Elijah Cummings asked for a hearing with Cohen before the House Oversight Committee.

“These are extremely serious crimes that implicate the fundamental underpinnings of our democracy, and they warrant robust and credible oversight by Congress as an independent Constitutional check on the Executive Branch,” Cummings wrote.

This week, both Senators Richard Burr (R) and Mark Warner (D) of the Senate Intelligence Committee issued a joint statement saying they had “reengaged” with Cohen, who has already testified before the committee as it investigated Russian involvement in the 2016 election.