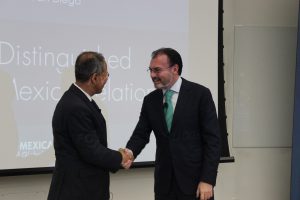 The relationship between the United States and Mexico is a challenge since President Donald Trump took office in 2017, according to Secretary of Foreign Affairs in Mexico Luis Videgaray Caso.

The Mexican politician visited San Diego as part of a two-day work tour that included a lecture at the Center for U.S.-Mexican Studies of the University of California in San Diego, on Thursday, March 22.

“We are at challenging times since Trump was elected. Since I took office, I talked to experts in the U.S.-Mexico relationship including public officials, and academic leaders, but I soon realized that there is no playbook to manage this relationship, we can’t follow the steps from the past, because we are facing a new challenge,” Videgaray Caso said at the First Annual Distinguished Lecture on U.S.-Mexico Relation. “The strategy we had 20 years ago, it’s not feasible now.”

The Mexican diplomat said that both countries need to work together and put aside any differences because both countries depend in each other, not only regarding in commerce like through the North American Free Trade Agreement but also in other economic and social issues.

“We want to hold an annual conference with a distinguished speaker to talk about the U.S.-Mexico relationship, and this year’s lecture was really important because it’s an election year in Mexico and NAFTA is currently in renegotiations,” said the director at the Center for U.S.-Mexican Studies of UCSD Rafael Fernandez de Castro.
The conference included the presence of local scholars, students and business and community leaders like Consul General of the Mexican consulate in San Diego Marcela Celorio, among others.

“The Secretary of Foreign Affairs gave us an outlook of what is happening between the relationship of the United States and Mexico, he really knows what is happening at the renegotiations of NAFTA. Videgaray mentioned that the Mexican federal government has a positive attitude and good faith for a great agreement,” Celorio said. “He also talked about the binational culture we have at the border. We are really pleased that he visited the Cali-Baja region so he could see how the dynamic works in this region.”

“There has never been a more critical time for us to advocate on behalf of our binational region. This is all about working together to overcome our challenges, strengthen our economies and create opportunities,” Faulconer said. “I look forward to working with Secretary Videgaray and other federal leaders to create more efficient infrastructure, protect the environment and advance trade for both of our countries.”

The purpose of the meeting between Faulconer and Videgaray Caso was to discuss binational policies and issues important to regional growth, global competitiveness and the environment. Some of the topics discussed included advocating for the modernization of the NAFTA, promoting cross-border commerce, enhancing efficient border infrastructure including the Otay Mesa Port of Entry East, and addressing the needs of the Tijuana River Valley to protect the shared environment, make improvements to protect public health and improve wastewater infrastructure.

Videgaray Caso’s work tour also included a meeting with SANDAG officials and a tour at the site proposed for the Otay Mesa Port of Entry East.

Art Castanares purchased La Prensa five years ago and brings decades of experience in government and politics in his quest to find out what government officials and others are hiding from the public. Host of Behind the Curtain.