It’s a new day for women and people of color in San Diego politics, as newcomers step into elected positions throughout the County.

Jill Galvez, who has lived in Northwest Chula Vista for more than 26 years was recently elected to the Chula Vista City Council to represent Council District 2, which has some of the City’s oldest neighborhoods including the historic downtown Chula Vista and the Bayfront.

Galvez commented on why she decided to run for office, “Chula Vista is the best place on earth to live, raise a family and retire. I am determined to work hard for our community to make good things happen and make our neighborhoods proud.”

Galvez is already among Chula Vista’s most dedicated residents serving and volunteering on a number of boards and organizations. Her past experience includes fighting City Hall to preserve cultural arts, economic development, and code enforcement. She has also been a strong advocate for transparency in local government and school districts.

Galvez explained how she is feeling about her election, “I’m both honored and excited to be the first District 2 City Council representative elected under district elections, to focus on our neighborhoods and part of town. She also addressed some of the issues at hand, “Northwest Chula Vista deserves attention and hard work on issues important to us: public safety staffing levels, aging infrastructure (including overhead power lines, sewer, sidewalk and street repair) and a focus on our Bayfront, with jobs and opportunities for Chula Vistans first. At the same time that we see many changes unfold in District 2, we need to be mindful of how those changes may impact our communities.”

New leadership also comes to the San Ysidro School District with Rudy Lopez and Humberto Gurmilan getting elected to serve on the school board. Lopez is a lifelong resident of San Ysidro whose family owns La Bodega Hermanos Lopez. Gurmilan overcame a severe surfing accident is a well-known journalist, and San Diego College City professor. 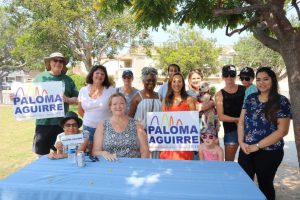 In Imperial Beach bodyboarder Paloma Aguirre was elected to join the Imperial Beach City Council. Aguirre, who is said to be the City’s first Latina councilmember, once worked as a social justice community organizer in South San Diego before later joining the nonprofit Wildcoast where she oversees projects to conserve coastal ecosystems in the border region.

Louis Barrios, Mary Susan Doyle and Marco O.R. Amaral won seats on the school board for the South Bay Union School District. Barrios, a math teacher and engineer, said he wants students to have access to computer science courses, coding and financial literacy. Doyle, is an educator with 27 years of experience, volunteers with the Gay Straight Alliance at Mar Vista High and wants to establish a culture of equity and tolerance at all South Bay schools. Amaral’s proposals include competitive salaries for all unionized workers.

In Vista, district elections were held for the first time. Corinna Contreras edged out incumbent John J. Aguilera for a seat on the Vista City Council. Aguilera a Democrat and farming advocate said she supports the development of a community policing program.

Incumbent Escondido Republican Mayor Sam Abed lost to challenger Paul “Mac” McNamara, a Democrat and U.S. Marine corps veteran who is serving his second term as an elected trustee of the Palomar College Governing Board. Abed who was born and raised in Lebanon was well-known for his anti-immigration views and his opposition to California’s sanctuary laws. McNamara for his part has stated, “Over the past years the city has lost its way become enmeshed in divisive politics.”

McNamara’s election along with the election of Democrat Consuelo Martinez will give Escondido a Democratic majority on the city council. Martinez won incumbent Republican Ed Gallo to whom she lost to four years ago, when the two ran against each other.

Chula Vista native Leticia Cazares and current Vice President of the Board for the American Civil Liberties Union was elected to serve on the already diverse Southwestern College Governing Board.

In San Diego Sean Elo, the associate director for campaigns and policy with Mid-City Community Advocacy Network (CAN) beat former San Diego City Councilmember David Alvarez in the race for a seat on the board of the San Diego Community College District. Elo, who was endorsed by the Chicano Democratic Association and is a first-generation community college student who was once homeless. He has stated that experience motivates part of his vision that the basic needs of students and professors are met.

In the city of San Diego Jennifer Campbell, Monica Montgomery, and Vivian Moreno were officially sworn in this week, making for a total of five women on the city council. All three are Democrats and their elections create a Democratic supermajority on the nonpartisan city council.

“This is an historic day for our city,” said Councilwoman Barbara Bry. “We have five women — five strong women from diverse backgrounds are going to constitute a majority of our San Diego City Council.”

Campbell who was raised in a working-class family, her father a union machinist and mother a secretary and community volunteer is a doctor. During the inauguration Campbell outlined her vision and a number of her priorities.

“It is going to be a new era for San Diego because we will all be untied elected, business leaders, labor, government, non-profits and religious institutions,” Councilmember Campbell said. “Our greatest priority must include making meaningful progress in resolving the homeless crises. This is a matter of compassion and moral duty,” she added.

Vivian Moreno was sworn in by outgoing San Diego City Councilmember David Alvarez whom she previously worked for. During her comments, Moreno who spoke in English and Spanish also said “For far too long City Hall looked to our communities to bear the burden of responsibility when it comes to taking on unpopular projects or inequitable budget cuts. No more.” Towards the end of her comments Moreno also said, “To the people of District 8, you have my commitment that we will fight every day. And one thing I want to make clear District 8, I work for you. You are my boss.”

Civil rights attorney Monica Montgomery was sworn by her father and also spoke during the inauguration, “We’re here,” she said during her opening statements. “I asked our guests to wear traditional garb because we are very proud of where we have come from and we don’t want to forget.”

Montgomery a 30-year-resident of council District 4 said she ran because she saw the district lacking. She unseated incumbent and fellow Democrat City Council President Myrtle Cole, who was considered an ally of Republican Mayor Kevin Faulconer.

“In the area of police reform we need better relations between community and police officers. I knocked on thousands of doors and spoke to so many people who have the utmost respect for the job of police officers and so do I,” Montgomery said.