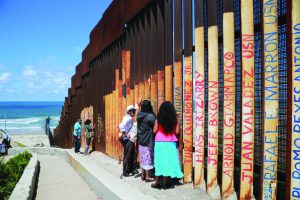 The closure of opportunities to apply for asylum from could force some migrants to try to enter the United States in an undocumented manner, warned José María García Lara, coordinator of one of the main shelters in Tijuana, the Juventud 2000 refuge.

The measure implemented last week “will push the (migrant) community to look for options to get out (of Mexico), regardless of what they see happening in security at the border,” said the leader of Angels Without Borders.

García Lara said that most of the people in the shelters are families that most likely would not be willing to risk crossing the border with their children in an undocumented way, but “it is not ruled out that some try, despite the pressure of border authorities. ”

“As we are in the border area, the conditions are set for some to try to cross,” he said.

He said that since the migrants in the shelter learned about the new disposition of the US government to deny practically all cases of asylum, except those of victims of human trafficking, they began to think about alternatives and one of the most mentioned is to seek refuge in Mexico.

The United States government canceled without warning the passage of migrants moving from Tijuana to San Diego to apply for asylum.

Migrants in the immediate vicinity of the pedestrian checkpoint of El Chaparral told Excélsior that no one has passed to apply for asylum since Thursday of last week, without the US authorities giving any explanation. On average, between 50 and one hundred people passed by.

“Since there is no way to enter legally, because they closed the possibilities of requesting asylum and no longer request it, obviously there are migrants who feel desperate and some of them think of crossing undocumented,” said Garcia Lara.

The three alternatives that migrants have mentioned are undocumented crossing, returning with their families to their places of origin and staying in Mexico as refugees if they get that option.

In the case of Guatemala, to prevent some migrants from trying to reach undocumented US territory, that country’s consul in Tijuana, Erick Cardona, offered to pay the return ticket to his country to Guatemalan migrants who request it.

With the new provision, which requires that Central American migrants first request asylum in Mexico and only if Mexico rejects it can they apply for it in the United States, asylum requests continue only for Mexican families who also seek asylum, originating mainly from Guerrero and Michoacán.