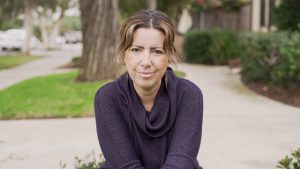 Bettina Hanna is a Brazilian filmmaker who knows how to make the most of both superficial and meaningful subject matter. For many years, she has successfully directed teen reality shows for MTV in Brazil. Although she now lives in San Diego, she continues her work with MTV flying back to Brazil several times a year. Here in San Diego, she had made videos for several charitable organizations who work with orphans in Mexico, including Unity 4 Orphans and the Hans Schneider Foundation. The latter is her true passion, for she likes to highlight people with interesting stories and those who help others.

Hanna, 40, was born in Sao Paulo, Brazil. Although her family was very comfortable economically, her Egyptian born father and Brazilian mother taught her the value of helping others at an early age, something not always commonly done in upper class Brazilian society.

She received her BA in communications with an emphasis on radio and TV and was hired by MTV in 2003, to direct teenage reality shows. In 2009, she moved to San Diego to study journalism with her husband, Brian, a tennis pro and coach. They also studied English. Their plan was to only stay one year, but they both fell in love with San Diego.

Bettina wanted to start doing her own work, so she bought a camera and with her background knowledge, began to learn everything she needed to know to make good videos, such as camera work, editing and audio. Her first video was that of a military family reunion. She filmed the family greeting the father who had just returned from deployment in Afghanistan, an emotional experience.

She continued making videos and in 2013, she set up a Vimeo page where one can view the various documentaries she has made until now. She received a certificate in communications from SDUIS, a private university in Old Town, and extended her work outreach.

She now does social media videos for sports companies and promotional videos for charitable organizations and other social causes.

In the summer of 2017, she went with the Hans Schneider Foundation to Baja California to film the work they were doing there. This foundation had set up three summer camps east of Ensenada for various orphanages. The children from each orphanage got to come and enjoy a week of fun. They did various activities, such as swimming, horseback riding, painting, etc. Hanna says it was a life changing experience which made her even more passionate about highlighting those who help others, especially children. 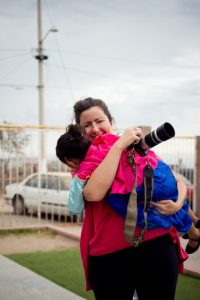 In 2018, she got together with Unity 4 Orphans. Unity 4 Orphans was founded by Joe Brandi in 2010 after he made a trip to Kenya. This “regular Joe” decided that he wanted to help less assisted orphanages in Latin America. His philosophy was not just to visit once, but to build lasting relationships with the kids and the orphanages. They bring toys, food, clothes, blankets, school supplies, and other necessities. One of the orphanages Unity 4 children goes to is City of Angels in Tijuana.

In the fall of 2018, Hanna went with them to film a special day for three orphanages in Tijuana where they had a big, special party. Volunteers dressed up as Disney characters and princesses to the delight of the children. For Hanna, it was a gratifying experience to see and film the excitement and happiness all around.

Her dream is to continue making videos like these, highlighting people who do good work in communities on both sides of the border. Finally, she wants to make videos that tell the stories of refugees and immigrants who come to San Diego. As a child of an immigrant, this is also close to her heart.