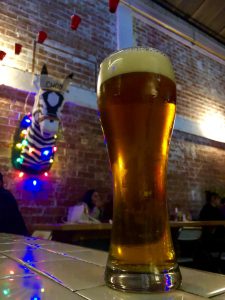 California is considered the American craft beer capital, and Baja California begins to follow in its footsteps, being currently the most important production region in Mexico.

This phenomenon has generated a brewing community on both sides of the border, which has innovated with different beer styles, such as IPAs and pale ales, receiving important national and international awards.

The bilateral relationship between brewers, who share their knowledge and experience, as well as the ease of finding the inputs for their preparation, has been decisive.

The director of the Tijuana Association of Brewers, Raul Aispuro Funes, pointed out that there are some collaborations, mainly with Coronado Brewing Company, South Norte, and Stone Brewing Co.

One of the most recognized results is the Xocoveza, a Stout inspired by the classic Mexican hot chocolate, crafted by Stone Brewing Co. in collaboration with Tijuana’s Cerveza Insurgente, which won the American Homebrewers Association Rally.

The association has been working for six years, with 27 members who have won international awards, such as Rámuri Brewery, which in March 2019 won the award for the best brewery in the Aro Rojo International Brewing Competition held in the Mexican state of Tamaulipas.

“Our task is to integrate ourselves as brewers and to improve the conditions in which we sell the product, we are negotiating with the government to reduce taxes in order to compete with the big breweries”, Aispuro stated.

Commercial beers in Baja California have a tax burden of 3 percent, while craft beers have a 13 percent responsibility, which makes it difficult to sustain nationwide growth.

For four years he worked in the development of house beer for Telefónica, creating Lírica, which began production in 2018.

“What brings me closer to the craft beer movement has to do with the social dynamics that are prompted from it, there I find creative people looking for new things that have to do with cultural and sensory expressions”, said Jimenez.

Craft beer production in Baja California is recent, beginning in 2011 with Cervecería Tijuana and its festivals. In the last year it came to have an economic income of about 95 million dollars, according to data from the Ministry of Tourism, with 100 breweries, 32 of them located in Tijuana.

“27 percent of the 16.5 million people who came from across the border, the 5 million Baja Californians who traveled through the state and the 6 million who came from other parts of the republic, did so for craft beer, wine or culinary themes”, said Óscar Escobedo, Tourism Secretary of Baja California.

For its part, the craft beer movement in California began in the late sixties, growing exponentially. The economic impact presently is 8.2 billion dollars annually, according to a study by the California Craft Brewers Association.

The state has 841 craft breweries, 130 of them located in San Diego. But very few produce for the Latino community, so the founders of the newly created Xteca brewing company: Mario Lopez, Fred Sotelo and radio personality Xavier “The X-Man” Soriano, decided to produce a Mexican-style lager in San Diego.

“Our beer is designed for the Mexican-American community. We know what our people like. We are looking for a refreshing product, with a minimum of bitter taste”, said Fred Sotelo, founding partner of Xteca.

Sotelo is of Mexican descent. His parents emigrated to the United States in 1920, but they never forgot their roots. Since he was a child, he experienced biculturalism, often crossing the border on leisure and recreational walks.

That Latino pride can be perceived in the beer from its packaging, which presents a label emulating the iconic image of a goddess of the Aztec Empire and the Pyramids of Teotihuacán.

The response has been so great that Xteca can now be found in restaurants from Little Italy to San Jose, and recently signed contracts with Petco Park and Walmart, producing 500 kegs in its first year.

For them, the most important thing is to create a community of Mexican-American craft brewers and expand south of the border. They currently maintain ties with Border X craft brewery in Logan Heights.

“We do not consider ourselves competition, I think we should all support, both our brothers in Los Angeles and in Tijuana, to produce quality craft beer that benefits our community,” said Sotelo.

To begin with, they plan to create a Latino craft beer festival, with the participation of producers from Tijuana, San Diego and Los Angeles.

“What fun it will be, to celebrate the way we do, with the participation of different breweries and styles, providing beer tastings to the community. It will be wonderful, it will be called Octubre Fest, alluding to Oktoberfest, Germany’s biggest beer festival”, said Sotelo.

These microbreweries walk freely and with the best of two worlds, examples of independent work that builds dialogues, erasing borders and giving free rein to creativity, to consolidate this region as the most important of said industry.