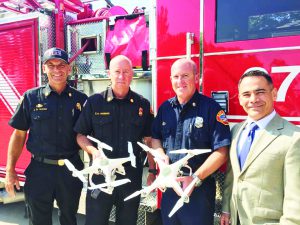 The City of San Diego, in partnership with Cape, a drone telepresence software developer, conducted a test of an unmanned aircraft system (UAS), at San Diego Fire Station 37, on Friday, August 10.

The UAS was equipped with video technology that provided aerial views during a mock emergency before responding crews arrived at the scene. The UAS will be able to provide an initial assessment of the situation and relay information back to officials to determine the need for additional resources or to scale back the response, making resources available for other emergency calls.

“This advanced technology will make emergency responses more efficient, reduce costs and potentially help save lives,” said John Valencia, executive director of the City of San Diego’s Office of Homeland Security. “Time is valuable in any situation and drones will allow the City to better allocate resources when responding to emergencies.”

“We are excited to work with the City of San Diego, building on our long-standing history of helping cities around the globe use drones to improve the safety of both area residents and visitors,” said Chris Rittler, CEO of Cape. “As one of the first IPP participants to launch a public safety deployment, San Diego is furthering its reputation as one of the most innovative cities in America, and we are extremely proud to be the technology partner to make it possible.”

Back in May, the City of San Diego was selected as one of 10 agencies nationwide to participate in the UAS pilot program.

“From wireless technology to human genomes, San Diego is renowned for its innovative spirit and talent that can’t be matched anywhere else,” San Diego Mayor Kevin Faulconer said. “This designation brings together some of our brightest minds in local government and private industry to develop cutting-edge technologies that are going to take robotic and aerial innovations to the next level.”

The Unmanned Aircraft Systems Integration Pilot Program is an opportunity for state, local, and tribal governments to partner with private sector innovators, operators and manufacturers to accelerate the development of drone technology.

“This announcement proves San Diego companies, organizations, academics, government and nonprofits are exceptionally well-positioned to advance the adoption into the national airspace,” said Lauree Sahba, Chief Operating Officer for the San Diego Regional Economic Development Corporation. “Not only does this program elevate San Diego as a research and development hub, but it also brings enormous potential to our economically diverse region.”