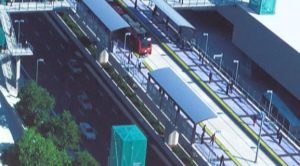 Major construction is scheduled to begin on Monday, March 18. Due to the complexities of this construction, work is expected to continue through late 2019.

Occasional full weeknight and weekend closures may be required during construction; advanced notice will be given prior to each closure. During closures, there will be no access to La Jolla Colony Drive from east of the I-5 on- and off-ramps to Rosenda Court. Closures are currently scheduled to take place Monday, March 18, to Thursday, March 21, from 9 p.m. to 5 a.m. each night.

Freeways and arterials in the Mid-Coast Corridor are generally congested and traffic congestion is projected to increase as the region grows. Population in the entire corridor is forecasted to increase 19 percent and employment is forecasted to increase 12 percent by the year 2030. The Mid-Coast Trolley extension will expand transportation capacity in the corridor to accommodate existing and future travel demand, particularly for peak period commute trips. The Mid-Coast Trolley will provide an effective alternative to congested freeways and roads for travelers and will reduce vehicle miles traveled.