Voters in Chula Vista received a campaign mailer this week with a front page picture of a candidate, a woman, and two young children in what would appear to be a family portrait, but the woman is not his wife or partner, and the kids are not his children.

The campaign literature, in support of Ammar Campa-Najjar, 33, who is running in the race to decide the next Mayor of Chula Vista in the southbay area of San Diego County, does not identify the woman or the children, giving the impression of a family portrait that is commonly used in political campaigns.

Campa-Najjar, who lost two campaigns for Congress in 2018 and 2020 in the East County’s 50th Congressional district, shifted to run for Chula Vista Mayor earlier this year. He graduated from Eastlake High School and worked at Eastlake Church as a teenager. 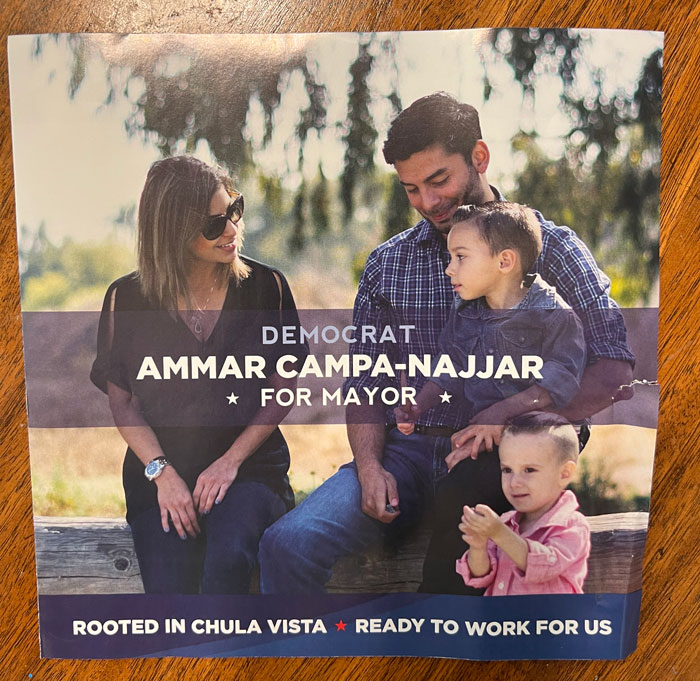 Although he lists a Sacramento mailing address on his official candidate filings, Campa-Najjar has been living at an Eastlake condominium owned by his grandmother because he does not rent or own a home in Chula Vista. During his congressional campaigns, Campa-Najjar listed a residential address in the East County community of Jamul. 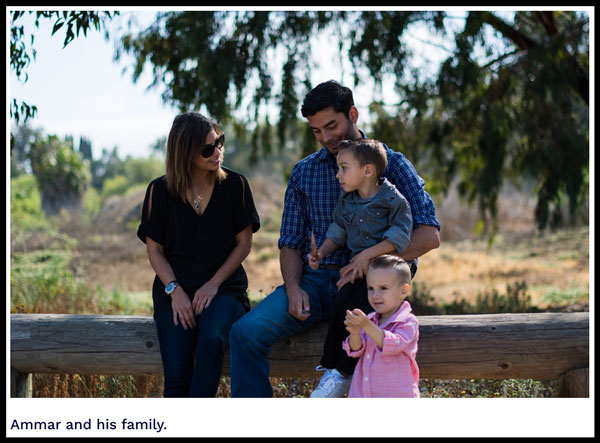 Campa-Najjar did not respond to a request for comment for this story.

Although Campa-Najjar is unmarried and has no children, he has been dating local Democratic Congresswoman Sara Jacobs since 2019, but she does not appear on any of his campaign literature or as an official endorsement on his website. Jacobs is not the woman in the campaign picture.

Jacobs, the granddaughter of Qualcomm co-founder Irwin Jacobs, currently represents the 53rd Congressional District which includes Eastern Chula Vista, Bonita, Spring Valley, and La Mesa, but she will now be running for the newly-redrawn 51st District which no longer includes Chula Vista. 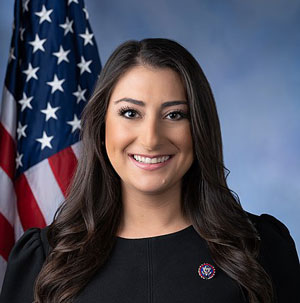 The campaign mailer was paid for by an independent expenditure committee named “Residents for a Brighter Chula Vista” established exclusively to help elect Campa-Najjar. The committee’s treasurer is Mason Inocentes, the son of former Otay Water District trustee Tony Inocentes.

The committee has reported raising over $116,000 from only six sources, including checks for $49,999 from Robert Hamilton of Carlsbad; a $25,000 from Enrique Esparza of Chula Vista and a $25,000 check from his company, Co-Production International in Otay Mesa; and $5,000 checks from Patricia Eng, Jorge Kuri Rendon, and Luis Magallon from Chula Vista.

Although Chula Vista’s campaign contribution limits to a candidate for Mayor are capped at $360 per person, independent committees are not restricted by the local rules.

A similar campaign piece became controversial in a 1990 election for the State Assembly when Assemblyman Jeff Marston used a picture of himself, a woman, and dog walking on the beach to give them impression he was married, but the woman was just a supporter used for the picture. Marston, who was unmarried at the time, was criticized for attempting to mislead voters.

Marston had been elected in a special election on June 5, 1990, but lost the re-election campaign on November 6, 1990 after using the misleading photo. He only served in the Assembly for 177 days.

Campa-Najjar, a registered Democrat, was criticized in October 2020 for a live-stream interview he held with Defend East County, a known far-right group whose followers regularly promote right-wing conspiracy theories, make racist statements, and publicly called for violence against Black Lives Matter protesters. Campa-Najjar and the group’s leader, Justin Haskins, smoked cigars and drank during the interview. 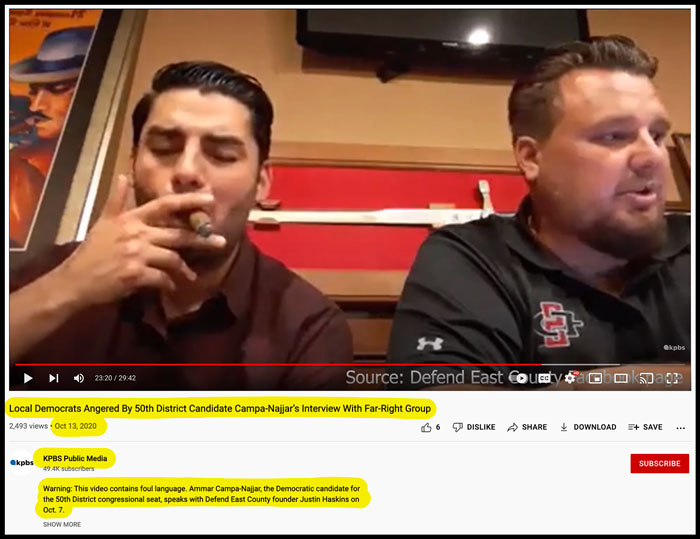 KPBS Video of Campa-Najjar with Hawkins during the interview

Hawkins later attended the January 6th protest at the US Capitol Building, saying at the time that “well over a million people” were in D.C. to force Congress to reject the Electoral College outcome.

During that same period, as Campa-Najjar worked to garner voter from conservative East County voters, he expressed in a Facebook exchange that he did not “support legal or illegal abortion”, taking a position that seemed at odds with his endorsement by Planned Parenthood, NARAL Pro-Choice PAC, and other pro-choice groups, including the Democratic Party and several prominent elected officials.

During the last weeks of the 2020 campaign, Campa-Najjar also used a 2015 picture with Donald Trump to position himself as a moderate that was not beholden to either party. He also posted a picture of himself with President Barack Obama. 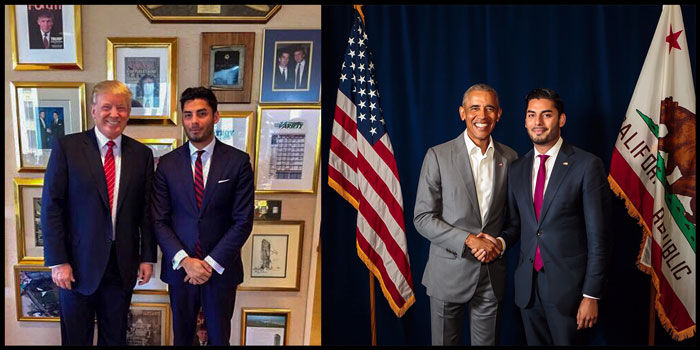 The election will be held on June 7th, but absentee voting will begin next week when ballots arrive in the mail. Mail ballots must be received or postmarked by the day of the election.