Drug Seizures and Arrests at US-Mexico Border on the Rise 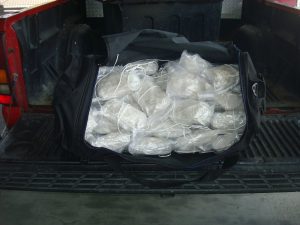 A higher number of people are being caught by Border Patrol and other federal agencies in San Diego attempting to introduce drugs into the United States in their vehicles or on foot at ports of entry, as well as through tunnels and mountains.

“The men and women of the San Diego Sector Border Patrol will remain vigilant as they patrol the border between our two nations to fulfill our mission to protect our country,” said San Diego Border Patrol spokesperson Eduardo Olmos.

Of the non-U.S. citizens detained, 7,004 were people from countries other than Mexico.

With three months still remaining in the fiscal year, marihuana continues ranking as a top choice for drug traffickers, followed by methamphetamines, heroin, and cocaine. So far this year, Border Patrol has seized over 7,700 pounds of cannabis, 4,046 pounds of methamphetamine, 2,443 ounces of heroin, and 1,595 pounds of cocaine.

On July 12, a 41-year-old American man added 45 pounds of methamphetamine to the statistics. He was caught near I-15 with 40 packages of methamphetamine, which he had concealed in a black canvas tote in the back seat of pickup truck. Officers say they were alerted by the driver’s odd demeanor.

“This drug seizure by our Border Patrol agents not only keeps these drugs off our streets, it makes them safer and halts the profits from their eventual sale,” said Rodney S. Scott, chief of the San Diego Sector Border Patrol.

The drugs seized, with an estimated street value of $830,000, and the individual, were both turned over to the Drug Enforcement Administration.
The federal government has also identified youth, who are often used as “mules” by organized crime outfits, as one of the most vulnerable populations in the drug trade.

The U.S. Attorney’s Office recorded a 153 percent increase in drug seizures between 2016 and 2017, from 39 to 99, respectively. Their biggest concern: the inflow of fentanyl, one of the deadliest drugs in the market.

“Smuggling narcotics is a dangerous proposition, particularly when it’s a lethal drug such as fentanyl,” stated Pete Flores, director of Operations for Customs and Border Protection in San Diego. “Young people need to understand that, no matter what they may have been told, there are consequences for smuggling drugs.”

The San Diego County District Attorney’s Office has processed 70 young people for trying to smuggle drugs through San Diego, in addition to 5 by the DEA in a single week at the San Ysidro Port of Entry.