Hope Rises for Victims of Abuse in San Diego 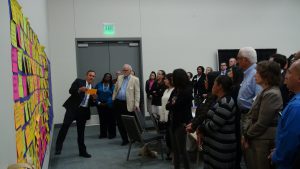 Eight years ago, Lisbet Perez called the police for the second time. Perez had no idea what would happen, and all she could think of was protecting her children from their abusive father, now her ex-husband.

The police officer told her she had to go to the San Diego Family Justice Center to get a restraining order. Perez went to the center the very next day.

“At the time, I had no idea about anything, but I was assigned to a very compassionate defender who told me everything was going to be okay. A detective who looked at my file told me I was in danger and needed to get out,” Perez said.

Perez, who was living in the country without documentation at the time, remembers that this meeting changed her life. From that day forward, the San Diego Family Justice Center became like her second home.

Perez’s story is a familiar one for many.

Yvette Lopez-Cooper, executive director of the San Diego Family Justice Center, explained that a large number of people who come to the center are of Hispanic origin. But Perez is different in that she did come forward to get out of the hands of her abuser. Lopez-Cooper, who is also an immigration attorney, added many in the Latino community are fearful of reporting crimes, but she pointed out a community is safer when everybody reports a crime.

The San Diego Family Justice Center, now in its 15th year of service, does not check the immigration status of anyone who comes in need of help.

Perez said at first, she was worried her legal status would be an obstacle, but instead she found herself feeling safe and accepted. She also got help at the Center to get a U visa, a nonimmigrant status visa set aside for certain victims of crimes in the U.S., and also a VAWA visa, which grants permanent residency for battered and abused spouses.

Perez is also one of thousands who have walked through the San Diego Family Justice Center’s doors, where multiple agencies and services are in one single place, allowing victims and survivors to get all the services they need under one roof. Previously a victim had to make separate visits to all the service providers, which were located throughout San Diego.

Services are not just for victims of domestic abuse, but also for those impacted by sexual abuse, family violence, child abuse, elder abuse and human trafficking. Survivors state publicly it makes a big difference to go to one location for help with divorce and child custody issues, to get food, to meet with advocates and therapists, to meet police detectives and prosecutors, to get help finding a job, activities for children to heal and have fun and a wide range of other assistance.

After then-San Diego City Attorney Casey Gwinn and his then Head Deputy City Attorney Gael Strack opened the Family Justice Center in 2002, Gwinn appeared on the Oprah Winfrey Show in 2003 and explained how co-locating services can save lives. Shortly after, President George W. Bush funded the creation of 16 new Family Justice Centers across the nation, all based on the San Diego model.

Gwinn and Strack now travel the country and also go abroad to teach how to create the program in their communities. More than 140 Family Justice Centers are in operation across the nation, and in other countries around the world.

Just this week, a strategic planning session took place at the San Diego Convention Center with more than 100 people from local community, medical, military, law enforcement, and government organizations to plan the future of the San Diego Family Justice Center and to improve the services offered at the first center.

During the crafting vision session, Casey Gwinn, currently President of Alliance for Hope International, talked about hope and its importance in setting future goals to help victims of abuse.

Perez, who now works with the District Attorney’s office as a victim resource navigator for homeless communities, said the San Diego Family Justice Center saved her life and the lives of her children, and she continues to be involved with the organization.

“I’m grateful for everything they did for me and I also want to give back. I didn’t know that just sharing my story, I could make a difference. I don’t have to have an education or money to make a difference. I also have a supportive community of other survivors who truly understand what I went through and are role models for me as well. They give me hope that everything is going to be okay,” Perez said.