Jenny and The Mexicats Come to San Diego 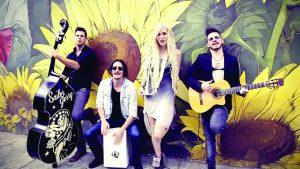 Jenny and the Mexicats is heading into the final scheduled dates of their 10th anniversary tour, which includes a San Diego stop this upcoming Wednesday, July 25, at Little Italy’s The Casbah.

The band, made up of English lead singer and trumpetist Jenny Ball, Mexican buddies Luis “Icho” Dias and Alfonso “Pantera” Acosta, on bass and guitar respectively, and Spanish percussionist David Gonzalez Bernardos, fuses the worlds of blues, Mexican zapateado, cumbia, jazz, pop, and flamenco to create a sound that reflects the multicultural background and influences of its members.

In 2008, Jenny was touring through Spain as part of a travelling orchestra. During a stop in Madrid, she met “Icho” and “Pantera” at a flamenco bar and instantly connected with their way of thinking about music. The newly-formed bond was so strong that she moved to Madrid shortly after her orchestra’s return to England, despite her not speaking fluent Spanish at the time.

As their celebratory world tour comes to its eventual close, the band has sent a heartfelt message to its fans by promoting their video, titled “Aprendemos” – “We Learn” in Spanish. This three-minute statement shows how the musicians in this ensemble have become a family with with every passing day in each others’ company.

David joined the group when it only had three members. Today, he provides the infectious rhythms which underlie the groups melodies. He briefly spoke with La Prensa San Diego about these 10 years on the road playing with his musical kin and his upcoming tour dates in San Diego.

“We have had an extensive tour and have been booked for festivals throughout Spain, such as Rio Babel, and in North America as well so we are happy to bring our music to so many people this year,” he said.

Among the festivals this group has featured at recently is Viva la Cumbia, which was celebrated this May at SDCCU Stadium in Mission Valley.

“Viva la Cumbia was great,” David exclaimed. “We had a great time playing with Grupo Cañaveral and Celso Piña and we showed that our sound fits in many places across many genres.”

Going into their solo show next week, the percussionist teased that the show will feature songs from their complete oeuvre, but will be centered on from “Mar Abierto,” their third studio release. He also added that their vide “Aprendemos” will also play a part in the show’s theme.

“The video is like the flag we are flying going through our 10th anniversary tour, it’s our story and what we have lived through,” he said.

Although David says the tour has been an intense one, full of work and long trips, he is still pumped up for the tour’s upcoming dates, including their San Diego show.

“We are looking forward to going over to San Diego already, it’s going to be a good one and we hope everyone can come out,” he closed.