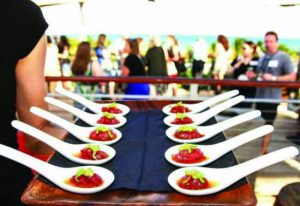 The many exquisite flavors of Latin America return to San Diego’s Marina Park once again for the sixth annual Latin Food Fest, a delicious weekend celebration happening on Aug. 17 and 18.

The largest food festival in town will feature tastings of dishes from all over Latin America. Attendees will have a chance to sample items as familiar and iconic as Mexican tacos, Salvadoran pupusas, and Argentine empanadas to Caribbean and South American stables such as Brazilian moqueca, Venezuelan arepas, and Cuban ropa vieja.

Special events such as the Chef’s Night Out party and the Toyota VIP Tent will feature celebrity chef demos, craft cocktails, gift bags, special stations, and a performance by La Junta Sound System.

Tickets are now available at https://latinfoodfest.com/