Cuban American author Meg Medina took the Newbery Medal this past January, the highest award given for children’s literature for her book “Merci Suárez Changes Gears,” making Medina one of a very few Latinx authors who have won the award in its 97 year history.

The book, which is Medina’s seventh, was inspired by her love of bike riding and follows the life of sixth grader Merci Suárez navigating changes in her life during middle school, and also experiences with her extended Cuban-American family.

“I worry for children right now, especially in Latino families, around the issue of immigration,” Medina told the weekly trade news magazine Publishers Weekly in a recent interview. Medina added, “We need books that sound and look the way we as Americans look, books that get into the corners of children’s experiences.”

Award-winning children’s author and illustrator Juana Martinez-Neal, who was born and raised in Peru, received a Caldecott honor in January for “Alma and How She Got Her Name.”

The book tells the story of Alma Sofia Esperanza José Pura Candela, who discovers the greatness behind her name.

Elizabeth Acevedo’s “The Poet X” took the Michael L. Printz Award for excellence in literature written for young adults. She also won the Pura Belpré Award for best book by a Latinx author, and last year won the 2018 National Book Award for Young People’s Literature, which was announced this past November.

“The Poet X” tells the story of a young Dominican-American girl who discovers slam poetry as a way to understand her mother’s religion and her own relationship to the world.

“For me, my ideal reader was my student, were these young people who struggled with reading, who struggled with finding themselves in literature and would time and again tell me, where are we?” said Acevedo who is also a former teacher during an interview two weeks ago with NPR. 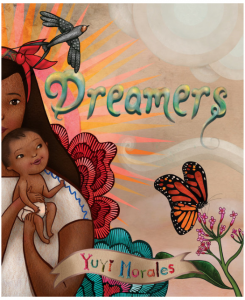 One other award-winning children’s books author, Yuyi Morales, who was born in Mexico, won the Pura Belpré Illustrator Award for her book, “Dreamers” a New York Times bestseller where Morales shares her own immigrant experience and her journey from Mexico to the United States with her then two-month-old son.

Morales, who says she is self-taught, was also given a 2015 Caldecott honor for her book “Viva Frida.” Morales and Acevedo were among six Latino/a authors who received Pura Belpré honors.

The Newbery, Caldecott, Pura Belpré, and Michael L. Printz, awards are given out every year by the American Library Association and are among the most highly regarded for young adult and children’s literature.

“This recognition will help us amplify voices in Latino literature throughout the United States,” said Dr. Nicolás Kanellos, founder and director of Arte Público Press.

The National Books Critics Circle was founded in 1974 and is made of nearly 600 working critics and book-review editors throughout the country. Each year it hands out awards in six categories which are given annually to a person or institution with an extensive history of significant contributions to book culture.

Two other honorable mentions include National City native Matt de la Peña who won the Newbery Medal in 2016 for his children’s book “Last Stop on Market Street,” and is also considered the first Latino author to win the award. The other is New York Times bestselling author Pam Muñoz Ryan, who holds a bachelor’s and master’s degree from San Diego State University, lives near San Diego with her family and received a Newbery Medal honor in 2016 for her book, “Echo,” among many other distinguished awards.