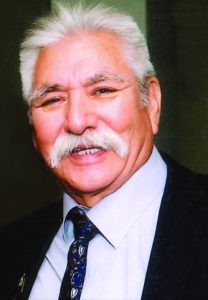 Nicholas Hernandez, a community leader on many fronts, was laid to rest with full military honors at Miramar National Cemetery on Thursday, May 24, after a Mass at Our Lady of Guadalupe Church in Logan Heights filled with family, friends, and civic leaders. Hernandez died May 15.

Mr. Hernandez had a long history of community service, including having been an active labor leader, a combat soldier in Vietnam, teacher, and founding board member of San Diego’s Ronald McDonald House for families of children under medical treatment.

Born on September 5, 1944 in Sombrerete, Zacatecas, Mexico, Mr. Hernandez immigrated to San Diego at age 7. He would recall riding horses as a child and plowing the fields with his father on a ranch in Mexico before they moved to San Diego.

It was from his parents that Hernandez inherited his unwavering work ethic, commitment to family and community, and his faith in God.

When Hernandez came to the United States as a seven-year-old, he spoke very little English and was frustrated with his teacher who spoke no Spanish.

Overcoming learning a new language, Hernandez went on to earn a Bachelor’s Degree in History, a Teaching Credential from San Diego State University, and studied at the George Meany Labor Studies Institute in Maryland. 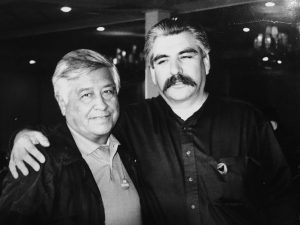 Hernandez went on to work for the national AFL-CIO, a became a proud friend to Cesar Chavez, especially during Chavez’s boycotts and marches organized throughout California. Cesar Chavez often called on Hernandez and local labor organizations to assist in these efforts.

When in San Diego, Chavez, his most trusted confidants, and his dogs, Boycott and Huelga, would spend the night with the Hernandez family.

Hernandez was drafted into military service in 1967, where he became an Army combat infantryman, a medic, and a machine gunner in the Central Highlands of South Vietnam near Pleiku. Hernandez earned several service medals, including two Purple Hearts.

Upon returning home from Vietnam, Hernandez worked in the trade and then joined the leadership of the union where continued to serve as a labor leader for over 20 years. During that time, Hernandez created many union job opportunities for the communities of color and women and was always ready to lead or join a picket line for a just cause.

In additionally to his professional work, Hernandez found time to coach Little League, his daughter’s softball team, and never missed a football, baseball, softball, or basketball game for his children and grandchildren.

He served on the United Way of San Diego’s Latino Future Scan, the Mayor’s Latino Advisory Committee, and founded the local chapter of the Labor Council for Latin American Advancement, and worked with the San Diego and Imperial Valley Labor Council, the San Diego County Building and Construction Trades Council, AFL-CIO, was a member of the VFW Don Diego Post, worked for AmeriCorps, the Corporation for National and Community Service, and was the Director of MAAC Project’s first YouthBuild program.

After working in the trades and labor movement, and after years with various professional organizations, Hernandez earned his teaching credential and began working for the Sweetwater High School District teaching history, social studies, and special education classes, and later taught adult education classes.

Hernandez especially enjoyed teaching the many veterans who participated in his classes. His war stories were legendary, and his students provided a perfect audience.

His career came full circle from working as a carpenter to teaching the profession he had mastered. His students respectfully called him “Maestro”.

Hernandez volunteered with many organizations, including the Cesar Chavez Service Clubs, coordinated campaigns for the Southwest Voter and Registration Project, and was a founding board member of the Ronald McDonald House Charities of San Diego.

He received awards for his outstanding work for the community in Labor, including from Barrio Station, Rayos del Sol Award, and for his service as a Board founder and member of the Ronald McDonald House of San Diego.

His work in founding the Ronald McDonald House of San Diego came from a very personal connection for Hernandez and his family.

Nicholas and Connie Hernandez lost a son to leukemia in 1976, and their grief turned to community action in their founding of the local Ronald McDonald House.

During the construction of the House, Hernandez approached organized labor unions his relationships and they provided most of the labor for free.

Hernandez served as President of the Board of Directors and continued to help until last week when his carpentry students presented Super Hero-themed jewelry boxes to the current residents.

The San Diego Ronald McDonald House was the 19th house to open in the United States; today there are over 300 Houses on every continent of the world.

Hernandez considered the founding of the RMH, a “Home Away from Home” and “The House that Love Built,” as his most proud achievement. This movement helped heal the loss of his son, brought hope and comfort to thousands of families, and provided a sense of pride in honoring the memory of his son, Matthew.

Through his many careers, Hernandez served his community as an ardent soldier in labor and politics, as an advocate for education and veteran rights, was passionate about social justice, and worked to promote opportunities for all.

Hernandez will be remembered for his unparalleled work ethic and his devotion to family. He was a gentleman, an historian, community activist, labor leader, educator, war hero, and head of a family of achievers guided and influenced by his example.

Most important, Nicholas Hernandez was a good son, brother, a devoted husband, father, grandfather, uncle, Nino, compadre, friend, hero, role model, and an outstanding human being. He touched thousands of lives through his work and caring spirit and he will live on through his family and legacy of good work.

Hernandez was preceded in death by his parents, Sixto Reyes Hernandez and Rosa Torres, and by his brother Manuel, and sisters, Catalina, Rachael and Candelaria.

Although family was always his first love and priority, Nicholas Hernandez still managed to serve in many professional capacities, community activism, and founded an important local charity.

May he rest in peace.