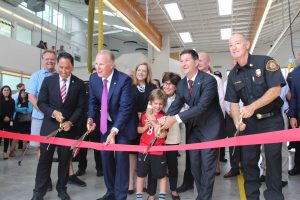 A new fire station that will serve Hillcrest and the surrounding areas opened its doors this week, marking the fourth new fire station to open this year and the ninth to be built or renovated since San Diego Mayor Kevin L. Faulconer took office.

“We’re in the middle of one of the biggest building booms in City history with the record level of investments we’re making to improve the quality of life in our neighborhoods,” Faulconer said. “This new fire station in Hillcrest is just the latest example of this surge in community projects that will benefit our neighborhoods for generations to come. After decades of neglect by past City leaders, we’re finally moving our city forward and delivering the projects our residents have been clamoring for.”

Since Faulconer took the mayor office in 2014, he has more than tripled the City’s annual investment in the Capital Improvements Program to fund infrastructure projects – from $179 million in Fiscal Year 2014 to $559 million for the current fiscal year. Those investments have led to a surge of new or upgraded parks, fire stations, libraries, recreation centers, and lifeguard stations, as well as road repair, transportation projects and stormwater upgrades that benefit neighborhoods across the city.

“Fire Station 5 will provide Hillcrest and the greater uptown community with much needed and deserved public safety resources and personnel,” said Ward. “With the addition of this state-of-the-art facility residents will have access to excellent neighborhood services that will ensure the quality of life of the community as it continues grow.”

It also incorporates best practices from the City’s Cancer Awareness and Prevention Program by including a locker room to keep gear away from living quarters and two separate washing machines for gear exposed to carcinogens.

“When I served on the City Council, completing this fire station was a promise I made to Hillcrest and Uptown. Though a long time in the works, working together, we got it done,” said Gloria. “It is my hope the residents of these communities will look at this facility feeling a greater sense of safety in their neighborhood, knowing help is near whenever it may be necessary, and have a sense of pride in their new fire station. In addition, I hope communities citywide will look at this facility as an embodiment of our commitment to the future — ensuring functional fire stations are accessible in every neighborhood.”