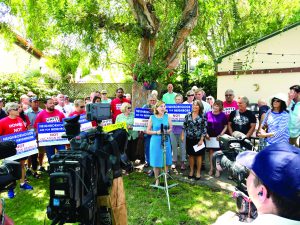 The San Diego City Council has approved new special regulations for the short-term rental of small and large homes and apartments. Most of these are rented through smartphone applications and have been the subject of controversy throughout San Diego due to noise complaints, renters’ poor behavior, and vandalism in the areas surrounding the rental.

The regulations, which take effect in 2020, are aimed at having stricter control no who earns money from these rentals and put an end to spats among neighbors in these communities.

After a decade of arguments and discussions, the City passed the new regulations package for short-term residential occupation by a 6 to 3 vote.

The Mayor’s proposal was amended and improved based on the needs expressed by Councilmembers and other San Diego public officials.

“I introduced my compromise proposal to help the City Council find enough common ground so they could pass comprehensive short-term rental laws, and with the additional amendments made today we’ve finally achieved that goal,” said San Diego Mayor Kevin Faulconer.

Changes include having residents obtain an annual short-term license from the City for their primary residence, and they may obtain one more for a dwelling unit on the same parcel.

Operators would also be required to secure a Transient Occupancy Tax Certificate, a Neighborhood Use Permit for dwellings with four or more bedrooms, as well as charge a fee that would go towards affordable housing. The nightly fee for a full-home rental will be $3.96, which must be paid by the hosts and would be deposited into a fund to provide affordable housing opportunities and thus alleviate the housing crisis in San Diego County.

Additionally, operators must comply with Good Neighbor Policy, including posting the license number issued by the City and local contact information on the property being rented.

The new regulations would also create a team of police and code enforcement officers to work evenings and weekends to address code concerns. There will be a 24/7 complaint line, as well as an online portal to report violations.

The first notice will be a warning, the second notice would result in a citation hearing, and a third violation within a 12-month period may result in having their permit revoked.

Companies such as Airbnb, one of the largest short-term vacation rental companies worldwide, estimates that this activity generates over $482 million in economic activity and creates close to 3,100 jobs in San Diego.

The proposal was also supported by residents who currently rent these properties, who felt that the regulations will provide clarity and resolve a series of legal gaps affecting the lives of hundreds of people.

“This proposal is not only supported by a bipartisan group of people and organizations, but also carefully balances the needs of our community and the importance of short-term rentals,” said Belinda Smith, an Airbnb operator in Mission Hills.