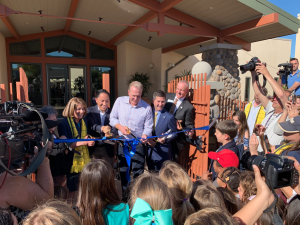 Elected officials, community leaders, and more than 1,800 volunteers celebrated the grand opening of a new state-of-the-art branch library that will serve Hillcrest, Mission Hills, and the surrounding neighborhoods.

“Libraries are places where San Diegans learn and explore, and that’s why we are working so hard to bring more of them to neighborhoods across the city,” said San Diego Mayor Kevin L. Faulconer. “This is the second new library to open its doors in a decade, and more is on the way. From Skyline to Uptown to San Ysidro, we’re working to provide more access to opportunity for all San Diegans and build a brighter future in every neighborhood.”

The community celebration included the presence of the area’s elected representatives – U.S. Rep. Susan Davis, state Assemblymember Todd Gloria and City Councilmember Chris Ward. As part of the celebration, volunteers lined the sidewalk to pass books from the old branch location to the new facility.

The new 14,000-square-foot library – located at 215 W. Washington St. – is more than triple the size of the community’s previous library that was built in 1961. It features modern amenities, including designated areas for teens and young children, a community meeting space, study rooms, computer labs, drought-tolerant landscaping, an underground parking garage and a design expected to achieve LEED Gold certification.

“This new, beautiful Mission Hills-Hillcrest public library is the product of years of visionary leadership and activism from the Uptown community. I am honored to have been able to get this project underway during my service as Interim Mayor and continue its forward progress as the District Three City Councilmember,” Gloria said. “We know this library will transform and enrich lives for Uptown, but that’s why we can’t stop here. Every community deserves a functional and accessible public library and I believe we should continue to prioritize the expansion of this crucial neighborhood service.”

Named in honor of the late philanthropists who helped fund it, the new Mission Hills-Hillcrest/Harley & Bessie Knox Branch Library will serve residents in Bankers Hill, Hillcrest, Middletown, Mission Hills, and University Heights. More than 350,000 visits are expected each year.

The $20 million project received a $10 million grant from the Hervey Family Fund and the Harley and Bessie Knox Memorial Fund at The San Diego Foundation while the City covered the remaining costs.

This marks the second new branch library constructed under Mayor Faulconer following the opening of the new Skyline Hills library in 2016 – the first to open in the city in a decade. A third new library is slated to open this summer in San Ysidro.