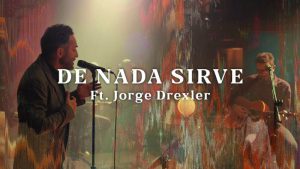 “De Nada Sirve” is the new track of the album “Otras Canciones”, the most recent work by No Te Va Gustar (NTVG) and counts with the brilliant participation of Jorge Drexler. Drexler’s interpretative expertise combines perfectly with the new arrangements that NTVG prepared for this intimate and emotional version.

Otras Canciones is an audiovisual and live album that was recorded on December 19 and 20, 2018 in the Hugo Balzo room of the Auditorio Nacional del Sodre in Montevideo. The filming, with state-of-the-art equipment, was under the production company Pardelion and the audio had the artistic production of Héctor Castillo (Bowie, Lou Reed, Cerati, Fabulosos Cadillacs), who has previously worked with the band in the album “Suenan Las Alarmas”.

This spectacle is thought as a good synthesis of what NTVG is, and at the same time as a starting point to launch their next international tour.