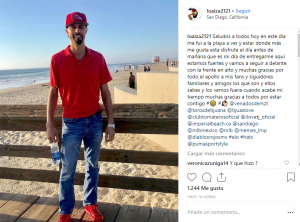 Good Friday was not so good for former MLB player Esteban Loaiza, whose day consisted of turning himself in to a San Diego federal court to begin serving a three-year sentence and then face deportation to Mexico on charges of possession of cocaine.

Loaiza, a Baja California native, arrived at court without speaking to the waiting media. In fact, he kept his gaze straight forward as he went in to avoid the dozens of reporters, photographers, and cameramen set up just outside the San Diego Federal court, his face partially covered by a baseball cap.

All the big-league star, who earned $40 million during his baseball career, did on Good Friday was comply with an order to appear to be transported to a federal prison.

Loaiza, who at one time was married to Mexican-American pop star Jenni Rivera, had already said goodbye to his fans on Instagram the day before from a Baja California Beach. He wrote, in Spanish: “Hello, everyone. Today I went to the beach to see and be where I like it best to enjoy before tomorrow when I have to turn myself in. we are strong and we will keep on with head high and thank you to my fans for all their support [sic] and followers [sic] family and friends who know who they are and we’ll see each other on the outside once my time is done thank everyone for being with you [sic] #? #??.”

Loaiza was sentenced on March 8 at the same courthouse to a reduced 3-year sentence after a plea agreement. He was originally charged with possession of more than 20 kilograms (about 44 pounds) with intent to sell, and potentially faces deportation after completing his sentence.

“I want to apologize to my family and fans, both in the United States and Mexico,” said 47-year-old Loaiza visibly upset. “I swear I will not do anything like this again. I am not that kind of person.”

Because he was a legal resident of the U.S. – not a citizen- he is expected to be deported to Mexico upon completion of his sentence at a federal prison.

Defense attorney Janice Deaton unsuccessfully petitioned the court to reduce her client’s sentence to less than two years, arguing that he is diabetic and had no previous criminal record.

Judge Janice Sammartino agreed to allow Loaiza to serve out his sentence at a prison near the border so that his family, who live in Tijuana, can cross into the U.S. to come see him, but did not agree to further reduce his sentence.

Assistant U.S. Attorney Larry Casper described Loaiza’s apartment in Imperial Beach as a “stash house”, and said he suspected that this was not the only time the former All-Star had been involved in drug trafficking, although he did not present any evidence of said suspicion.

“The government believes that this was not his only involvement in drug trafficking,” said Casper, adding that Loaiza earned about $45 million as a major leaguer, but said he was bankrupt.

During his trial, Loaiza stated that at the time of his arrest he only had 4 vehicles to his name and no properties, which is why he was living in a rented apartment.

During his career, he played for the Los Angeles Dodgers, the Chicago White Sox, the Pittsburgh Pirates, the Texas Rangers, the Toronto Blue Jays, the New York Yankees, the Washington Nationals, and the Oakland A’s.

A year ago, on February 9th, 2018, Loaiza was detained after a drug-sniffing drug alerted officers at a San Diego Sheriff’s checkpoint.

The Sherriff’s Department obtained a warrant to search Loaiza’s apartment, where they found the 20 kilos of cocaine inside a minivan parked inside his garage.

In spite of living just a few miles away from the Tijuana border, the court allowed the former baseball player to remain free on bail.

Prior to his plea agreement, Loaiza faced life in prison and a $10 million-dollar fine.