Number of Immigrants Killed by Border Officers Continues to Rise 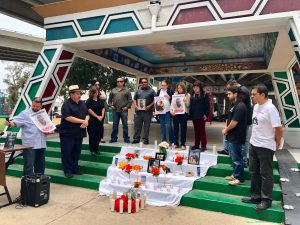 Since 2003, a total of 98 immigrants have lost their lives at the hands of U.S. immigration officers, according to the American Friends Service Committee in San Diego.

Today, a number of immigrants in San Diego say they are still living with the grief of having lost a loved one and not seeing justice being carried out against the attackers.

“We cannot rest if justice does not come. I think that’s the greatest pain I feel as a mother, seeing that my children are still so affected by the death of their dad,” shared Maria Puga, the widow of Anastasio Hernandez Rojas, eight years after his death at the San Diego border.

For others in San Diego, the pain is so great that after many years they feel as bereaved today as they did the first day. Such is the case of the Ceseña family, who lost their father and brother on Dec. 24, while they waited for them to celebrate Christmas Eve and Christmas at their home in El Cajon.

“We couldn’t believe it. It was such a big holiday and getting that kind of news was a shock to all of us. These officers are horrible (people), because we feel these are people we should be able to trust, not judge us or take a loved one from us or even our lives,” said Brenda Ceseña Cruz, the sister of Francisco Manuel Ceseña, who was killed three years ago near the San Ysidro Port of Entry.

San Diego activists say what worries them the most are the incidents that have occurred in the past two months along the U.S. border in places like Texas and New Mexico, with more lives being lost.

The latest incidents include the deaths of Claudia Patricia Gómez, a Guatemalan woman, which occurred southeast of Laredo, Texas at the hands of a 15-year veteran officer; and of Roxana Hernandez, a 33-year-old transgender woman who died while at Lovelace Hospital in Albuquerque, New Mexico under ICE custody.

“They treat transgender people like animals, and not just people like Roxana, but all immigrants. It is truly appalling that she had to lose her life due to being placed in these cold rooms,” said Veronica Mercado, who is also transgender.

Immigrant advocacy organizations lamented that people continue to lose their lives at the hands of immigration officers without regard to gender, immigration status, or age. Regardless, they said, they will continue shedding light on cases of abuse until they get justice for every case involving mistreatment and loss of life.

“The abuses, mistreatment, and impunity continue, and that is why we make a direct nexus between the cases of Anastasio and Claudia Patricia, because we don’t want (the perpetrators) to get away scot-free, we want for justice to be delivered,” said American Friends Service Committee Director in San Diego Pedro Rios.