Presidential Debate in Tijuana Draws People from Throughout the US 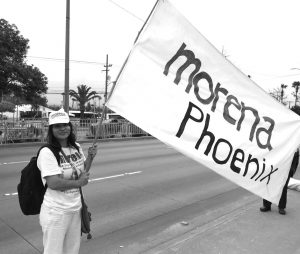 This past Sunday, May 20, Mexican nationals living in the United States traveled across the border to show their support for the Mexican presidential candidates, who held a second debate in the city of Tijuana.

Many drove down, others flew in, and a handful traveled by bus. All of them, however, made sure to arrive with enough time to rally for their candidate with banners and signs in the area surrounding the university hosting the debate, Universidad Autónoma de Baja California.

The reason they all traveled to Tijuana was to show that, although they now live in the U.S., today more than ever they seek a better future for the people still living in the country they once called home.

“I came down in my truck and brought three other friends with me. We got here to Tijuana at midnight after driving all day yesterday. There are other people coming from New York, caravans from Fresno, and more people from California,” said Ivone García Rodríguez, who traveled from Phoenix, Arizona.

These Mexican citizens living abroad expressed that they felt that in spite of living in the U.S., they still need to exercise their vote to foster change for their communities and relatives still living in Mexico. Some have already submitted their absentee ballots in accordance to Mexico’s National Electoral Institute regulations.

“We are fortunate to have the financial means [to do this]. I feel blessed, I have the money, I have papers, and that’s what I want for my co-nationals. Enough with the corruption, already,” García added.

These travelers also shared that they gave themselves plenty of time to cross the border, and in some cases slept only five hours so they could be there bright and early for the presidential candidates’ arrival.

Armed with flags, shirts, and lots of enthusiasm, supporters started gathering around the university campus between Universidad and Calzada Tecnológico streets since before 4 p.m.

Jorge González, who also came down with three other Los Angeles area residents, said he hoped these elections will lead to a better future for Mexico.

“We have been living in the U.S. for many years, but we still have an obligation with our country, our homeland; and we love Mexico, that is why we have come down to Tijuana from the U.S.,” shared González, who is an American citizen.

On the same date as the presidential debate, American and Mexican people came together mere feet from the border. In addition to supporting their candidate of choice, they delivered a message of “more love, less walls” in reference to what they feel is an anti-immigrant policy under President Donald Trump.

They came up with acronyms for their respective candidates, and made the traditional peace sign, stating that is what they wish for U.S.-Mexico relations.

While all this was happening at the border, Mexican immigrants were also gathering in Los Angeles’ Placita Olvera and rallying for their candidates and calling for an end to corruption among politicians and political parties in Mexico.

Mexican elections will take place July 1, and it will be one of the most important election processes in their history, since they will not only be voting for a President, but also for a total of 18,311 public officials on that same day.