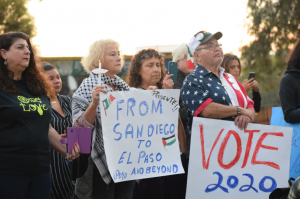 The gathering was organized by a group of volunteers who saw no such memorial had been held in San Diego and wanted to honor the lives of those killed in the attack.

The deadly assault, carried out on Aug. 3, killed 22 people and injured another 24. Although the incident is currently being investigated as a possible hate crime by federal authorities, a manifesto published by the shooter online clearly states Latinos and immigrants were his main target. The manifesto is also littered with racist rhetorical devices employed by current U.S. President Donald Trump when speaking of immigrants and minority groups.

Volunteer organizer Vanessa Medina said the group involved in putting the event together believed it was important to hold a ceremony in San Diego, as no such event had been held locally for the public and both cities share many cultural and geographic similarities.

“Today’s event is significant because the violence targeted Latinos in a border town, and we in San Diego are also a border town with a high Latino population,” she shared. “We hope nothing like that happens here, but want the community to know that El Paso’s struggles are our struggles.”

During the event, attendees made signs with messages of support, held a candle lighting ceremony, and read the names of the 22 victims. Guest speakers included local community leaders and educators who voiced messages of tolerance and resistance in the face of hate.

For Pat Palma, an El Paso native living in San Diego, the tragedy struck particularly close. She used to frequent the Walmart and the nearby Cielo Vista mall while living in Texas. Her friends still residing in El Paso regularly shop there with their families.

While her emotional wounds are still fresh, Palma says sharing her emotions with other attendees and seeing solidarity at such gatherings help the healing process.

“When I heard about this, I wanted to come because we are sending a message to the people of El Paso they are being thought of. We are a familia and while we might be over here, it is important for them and for us to know that there is unity between us,” she shared.