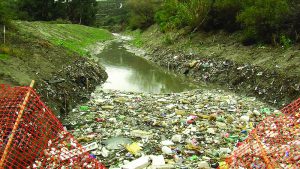 For years, the USIBWC has failed to properly manage and operate its wastewater treatment facilities. As a result, sewage, sediment and trash from the Tijuana River Valley have affected local beaches and coastal waters, prompting frustration and public health concerns.

“San Diego’s natural environment is what makes our region so special and we’re going to keep fighting to preserve it,” Mayor Faulconer said. “We’ve made this a priority in meetings with federal agencies in both the U.S. and Mexico, and now we must force the government’s hand to ensure it takes action. This gives us a new tool in the battle against sewage and trash that flows across the border and into our waterways. I thank the City Council, Councilmember Moreno and City Attorney Elliott for their work on this issue.”

In December, Councilmember Moreno issued a memo requesting for Council to hear the options for joining a lawsuit on the Tijuana River Valley. Her memo was in response to the most recent sewage spill that began in December and continues to release millions of gallons of sewage daily.

“One of the first actions I took as a Councilmember was to request that the City join the lawsuit,” Councilmember Moreno said. “The discharge of sewage has been a threat to the health and safety of our residents for far too long. We must hold our federal government accountable and also send a strong message that the South Bay will not be a dumping ground.”

In October 2017, City Attorney Mara W. Elliott served notice of the City’s intention to sue. Following the Council decision, the City Attorney’s Office will now begin working with the State Attorney General and the Regional Water Quality Control Board to prepare for trial. The court has set the trial date for April 13, 2020.
The lawsuit against the USIBWC was filed in September 2018 on behalf of the people of the State of California, by and through the California Regional Water Quality Control Board, San Diego Region, and California Attorney General Xavier Becerra. The State Lands Commission intervened in December 2018 and is now also party to the lawsuit.

“The pollution in the Tijuana River Valley is a disgrace, and I’m proud of this Mayor and City Council for fighting back against the federal government’s persistent disregard for our community’s health,” City Attorney Elliott said. “Joining the Regional Water Quality Control Board lawsuit represents San Diego’s best chance at a comprehensive solution to this troubling problem.”